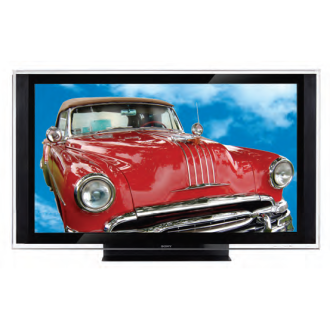 Just before our deadline for this issue, one of the most important trade shows of the year was wrapping up in San Francisco, CA. The Pacific Coast Builders Conference is where custom designers go to see the very latest tech gear for the home.

Spread out over more than three city blocks, 700-plus exhibitors show their stuff—lots and lots of very cool stuff. For anyone planning to build a new home the selection of products in the entertainment arena is nothing short of overwhelming. The editors at Texoma Living! made a few choices for this page based on what we thought were innovative, cutting edge, or just plan cool. We like cool stuff.

The Sony NHS-3040 Rack System is a next generation pre-built unit that needs nothing more than a huge plasma or flat screen to complete the picture. The package gives you true whole house distribution with up to 13 zones of HD video and audio. There are three versions of the NHS System, but who wants anything less than the big daddy Model 3040? Included in the set up is a 7.1 HDMI Home Theater receiver, 80 GB music storage and management server, 400 disc DVD changer with management system, AM/FM tuner, XM Satellite Radio, Single-disc Bluray disc player, 3 additional auxillary inputs and a well-designed controller unit for the Master of the Remote. The system supports IR and RS-232 control, and pairs up with Sony’s CAV-M1000 line of audio distribution systems. As long as you’re wiring up your house anyway, why not throw in Sony’s WS-ADP4 doorbell intercom adapter with electronic door release, so you don’t have to bother the butler to open the door for you while you’re both in the third-floor bedroom watching Desperate House-wives in HD. The all-in-one for the jet set will be available this fall with a price tag not yet revealed. It won’t be cheap.

If you already have an impressive set-up, then maybe the Sony BRAVIA® XBR® series LCD Flat Panel HDTV will get the job done. One of the stars or the show at the Pacific Builders Conference, the new screen already has a good backlog of orders, according to Sony. Measuring in at 70 diagonal inches, this is as good as it gets outside of a projector and screen. With full HD 1920 x 1080 progressive resolution, the picture has been promised as nothing short of lifelike. In fact, Sony touts that this new screen can display “more natural and vivid colors similar to what the human eye can actually see. Red-green color blind men notwithstanding. And everyone in the room can enjoy the scene with a 178-degree viewing angle. Available now in most major cities: $32,999 MSRP.

Prices continue to decline on high quality LCD projectors. Sony’s BRAVIA 3LCD VPL-AW15 features 1280 x 720 progressive resolution—ideal for large screen home entertainment use with both movies and gaming. Lower than average fan noise, a bright 165-watt Ultra High Pressure Lamp and a short focal-length lens with 1.6 times zoom makes it a good choice. With a MSRP of $1,300 the price is right.

Let’s talk speakers. Big, loud, eardrum-blowing power-pumping speakers. That would be the Pioneer Electronics Elite Series S-1EX at $9,000 MSRP, which will deliver the goods, and then some. The bass drivers are 7-inch behemoths that are ready to rumble at the touch of a button. You won’t find these at Best Buy, but you can order direct from Pioneer.

Life at the Top

“It’s really a whole-body workout. I mean it’s a Stair-Stepper from hell. You work your calves, arms, thighs, I mean everything. You’re climbing completely vertical, lifting your own body weight. If you put on thirty pounds of safety equipment, plus the weight of the tools, and the different parts you have to carry, it may add two hundred extra pounds slung all over your body. So yeah, we get our workout.”