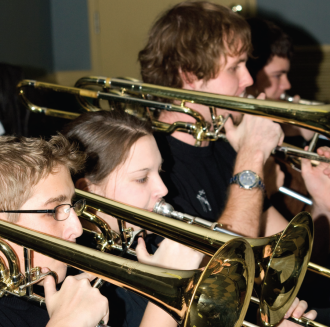 This story appeared in the Spring 2009 issue of Texoma Living! Magazine.

There was ice in the wind outside, but inside it was “Summertime,” as Sherman High’s Bearcat Jazz Band played the 1935 George Gershwin standard from Porgy and Bess. It made no difference that the venue was the Piner Middle School cafeteria; the audience and musicians alike might just as well have been in a tucked-away jazz club at 18th and Vine in Kansas City, the Savoy Ballroom in Harlem or Preservation Hall in the Vieux Carré. It was proof of music beyond Hanna Montana. Jazz lives.

What is jazz? Historically, jazz was conceived in New Orleans, moved up the Mississippi River to Memphis, on to St. Louis and into Chicago. The earliest sound influences came from African tribal drum beats that slaves juxtaposed with spiritual word, giving us the beginnings of music with soul, sadness or the “blues.”

Those who play jazz have often expressed the feeling that it should remain undefined, that jazz should be felt. “If you gotta ask, you’ll never know,” said Louis Armstrong.

“Jazz is the art of improvisation musically,” said Paul Onspaugh, the Denison High School Band Director. “I don’t think anybody’s ever going to define it. The improv is a journey, and you hope you reach the end with a happy crowd.”

There’s something for everyone. And that is the point that Onspaugh’s counterpart in Sherman, Scott Anderson, tries to convey to his jazz ensemble. “Kids are different, their personalities are different, and jazz really gives them the ability to stand out, be opinionated and express themselves.”

Luke Johnston, a senior and a trumpet player and one of the Bearcat standouts in the jazz program, caught the spirit. “I like playing high notes. Trumpets are loud and arrogant.” And, he might have added, “a way to stand out from the crowd.”

Jazz programs in Denison and Sherman are booming. Even the names are right, the Yellowjackets and the Bearcats. Bring on the raccoon coats, the Stutz roadsters and Bix Beiderbecke. There is also an element of discovery. Onspaugh told of a boy with a sax who had just discovered Charlie Parker. “He just had to tell me about it. It was almost funny that he was so excited.”

There are two orchestras at SHS already, and director Scott Anderson said he had enough student musicians—well, almost enough—to create a third jazz band. The big bands of the 1930s would carry from thirteen to twenty-five musicians, and what works then, works now. “Typically we’ll have five saxophones—two altos, two tenors, and one baritone—five trombones, five trumpets, a bass, a guitar, a drummer and a piano,” said Anderson. That’s nineteen, and there is always room for one or two more.

Sometimes the bands use a vocalist. Denison’s Helen Moore carries on the tradition of Billie Holliday and Ella Fitzgerald when not playing trombone, and in Pottsboro, where students have a volunteer jazz group, Cammy Caldwell does the honors.

Sherman’s jazz students get the opportunity to shine, says Anderson, during March and April competitions. They also perform at the school’s annual Spaghetti Dinner, and monthly, at the other schools in the city. Most notably, Sherman’s jazz students attend a week-long clinic and hold a concert every April with a guest artist. This year’s guest artist is Shelli Burg, a pianist, from the University of Southern California in L.A. The clinic closes out on April 25 with a concert and fundraiser. The money raised at the event, along with funds from the Sherman Education Foundation, is used to purchase new music and to host talented musicians such as Berg.

Denison has one jazz band and may add another if interest warrants. The standout with the Yellowjackets is sophomore guitarist, Tim Hoover. In his freshman year, Hoover won the school’s Louis Armstrong Award. He also plays with The Blu Rock Band, a family enterprise, which is fast becoming a big noise in local hot spots.

Hoover’s solo at this year’s Neewollah (Halloween spelled backwards) Concert at Denison High School blew the audience away. He snuck in snippets of movie and television soundtracks to whatever he was playing, and with a discerning ear, you could hear two riffs playing at once.

Jazz is not really for lazy listeners. “Exactly,” said director Onspaugh. “Jazz is for the more involved listener!” Face it, you gotta be smart to be hip.

“Jazz definitely won’t come and go like disco,” Onspaugh said. He regards the public high school arena as an important venue for keeping jazz alive in the United States and for passing along this most American of musical forms, with all the complexities, the metamorphoses, and the journey that are its legacy, from generation to generation.

For Tim Hoover, it is not quite that complicated, at least not now. “What is jazz?” he said. “It’s kind of a lifestyle. It’s being versatile. It’s who I am.”

In 1978, the Cottons moved to Chickasha, Oklahoma, Ronald’s home town. Joetta worked as a secretary in an oil field company. When the oil business went bust, she landed a job in the Chickasha Library as an administrative assistant and loved it. She took library science classes and completed a bachelor’s degree in Business Administration and soon became the Library Director.