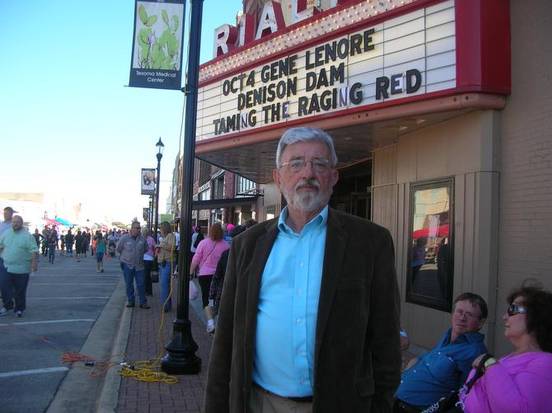 “Gene Lenore was an incredible writer.  He not only investigated and wrote the news, but he had a great imagination and created some wonderful, fictional adventure stories.  He and I even wrote a stage musical”.
—Gil Nelson

(Gene Lenore was a frequent contributor to Texoma Living! Magazine. He passed on August 17, 2022 at age 85. His friend and colleague, Gil Nelson, remembers his contribution to journalism in North Texas.)

My association with Gene Lenore goes back some 45 years to the late 1970s at the old KIKM radio broadcast facility in Sherman.  We were polar opposites.  He was a serious, no-nonsense, educated news professional and I was a happy-go-lucky, very youthful radio announcer. Somehow we connected and managed to have this on-and-off association/friendship over these many years.

Gene covered the local area news for KIKM and he was also News Director and Anchor for KXII-TV.  Gene also published a local magazine that was rather short-lived, but it was well done, just underappreciated.  I often feel Gene Lenore was also underappreciated.  It is my opinion that (at the time) neither KXII-TV nor KIKM radio knew exactly what they had in Gene Lenore.  That is not a criticism, but merely an observation.

Gene graduated from college around 1959 and then spent the summer bouncing around Europe.  He especially loved Paris, France, and developed an appreciation for French wine.  Gene was an excellent observer of life/humanity and was well suited to his chosen profession. 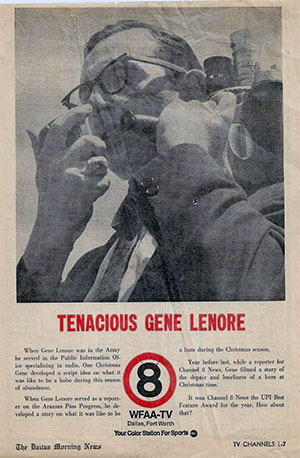 I am not too sure of his journalistic path, but I do know he came to WFAA-TV Channel 8 Dallas just three short years after the assassination of President John F. Kennedy.  Most of the journalists and reporters from that groundbreaking era of broadcast news were still there and Gene benefitted greatly from their experience.

It should be noted that he was also the first to utilize the mini-cam.  Up until then, a reporter depended on still pictures and damn good observation.  Mr. Lenore did it all: He conducted the interview, ran the camera, wrote and edited the story…all on a deadline.

In later years he was always writing and always involved in a project.  He wrote scripts for documentaries that were aired on the National Geographic channel.  He even produced his own documentary about the history of Denison Dam.  I had the pleasure of assisting him and narrating the presentation.

Gene Lenore was an incredible writer.  He not only investigated and wrote the news, but he had a great imagination and created some wonderful, fictional adventure stories.  He and I even wrote a stage musical, produced by Grayson College’s Theater Department called “The Lone Star Truck Stop.”  Gene would have probably never done “stand-up,” but he had excellent comic timing as a writer.  “The Lone Star Truck Stop” contained his words and his humor, I simply contributed music to what he had already imagined.

I do rather miss those days at table #4.  As the beers kicked in, the stories always got a little more interesting, but in the spirit of a true journalist, I’ll not reveal my sources.  What happened at Applebee’s, stays at Applebee’s.