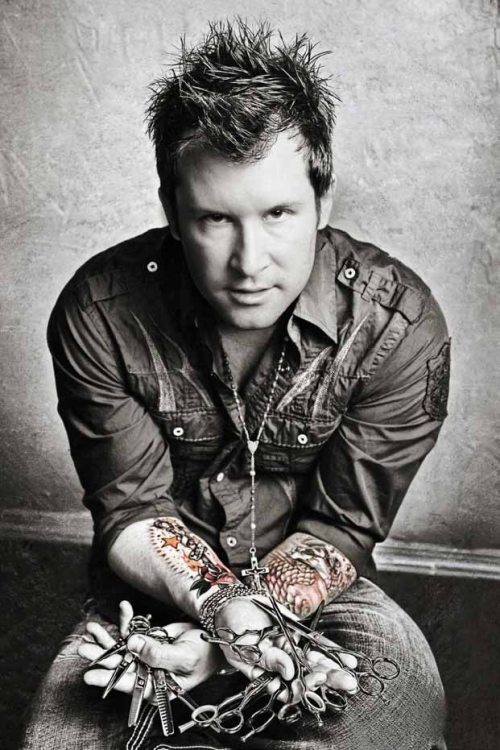 Garrett Patton is surviving the “great recession” and expanding at 224 2 W. Houston Street, and that’s good news for scores of Texoma patrons who rely on the talents of Patton and his associates to keep their tresses in trim.

“We now have six fulltime stylists,” said Patton during our recent visit to his shop. When we did the story three years ago, he had four. “It’s a family atmosphere, and we make it fun.” Besides upping the cutter count, he has redecorated the shop and redesigned the work stations.

The economy may be slowing, but peoples’ hair keeps growing, and Patton is glad of that. “I used to say we were recession proof—now I say we’re recession resistant. We were last to be slow with the recession, and we’re starting to pick back up. We have the best gig in the world; customers pay us to advertise for us. No other profession that I can think of can do that.”

Though most businesses, Patton’s included, are watching expenses closer than ever, one thing he refuses to cut on are the tools he cuts with. “I have a scissor fetish,” Patton said, flashing the newest addition to his collection, a pair of Damascus Scissors by Musashi, a Japanese company that makes Samurai swords. Another useful tool for Patton is the Fan Page on Facebook. He uses the networking site to post information about events at his salon.

A photo in 2007 included Garrett’s 18-old son, Major. Now five and a half, Major is all about Spiderman, Transformers and soccer. “He does a kind of robot run when he’s playing soccer,” said dad. “It’s really cute.” So does he let his son play with scissors? “He loves to cut paper, and if he follows in my footsteps, that’ll be okay, but I hope he wants to be a doctor.”

Editor’s Note: As Texoma Living! enters its fourth year of publishing we realized that we now have “history.” Although most of our readers have been with us since the first issue in 2007, many have not. Our idea is to turn back the pages to early issues and bring you an update on the people we introduced to you back then.

When Charlie and Gloria Morton purchased the Inn of Many Faces in 2001 from sisters Pat Gunter and Judy Johnson, they bought not only a beautifully restored and furnished Victorian home, but also a collection of faces scattered throughout the house. Many of the faces are carved in the lovely old pieces of furniture, not glaring out at you, but quietly waiting for you to find them.