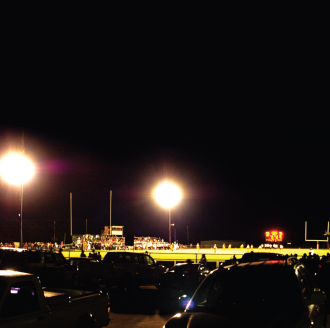 “Individual commitment to a group effort—that is what makes a team work, a company work, a society work, a civilization work.” —Vince Lombardi

I remember as a child riding back to Bonham after following the Bonham Warriors to an out-of-town football game with my family. As we drove home, I would get on my knees in the back seat and look out the back window at the headlights of what seemed like a thousand cars strung out behind us in the night, all going home after the game. In small town Texas, high school football is not a school event; it is a community happening. The corners of the field are darker, the crowds not collectively quite as loud, many of the participants not quite as skilled as in the larger places, but the field is still one hundred yards from goal line to goal line, and a touchdown still adds six to the scoreboard. The game is the same, but the experience is different. You are likely to know the people in the ticket booth, and the fellow cooking hamburgers to order on the backyard grill set up next to the concession stand might be the preacher or the clerk from the hardware store. One Friday night in October, Texoma Living! went to Bells, Whitewright and Tom Bean. We could have found much the same special feeling of “place” in Gunter, Collinsville or Leonard. The scores didn’t really matter either; most will be forgotten in the years to come. But memories of the lights and the band and cheers in the chill of an autumn night will last forever.

“If two hitherto rival football teams, under the influence of brotherly love, decided to cooperate in placing the football first beyond one goal and then beyond the other, no one’s happiness would be increased.” —Bertrand Russell

Had it not been for the Civil War and Reconstruction periods, our own Austin College might still be in Huntsville.

Lions and Tigers and Bears

I bought a book off the discount rack at a local bookstore not long ago entitled Quintessence: The Quality of Having IT. On the jacket fly, the author explained the book’s purpose. “This a book about the objects of this world that transcend their form and function, that offer more to us than we ask of them—that rise above themselves to assume iconic stature.”