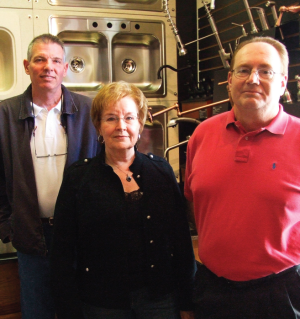 But every company has to change with the times. What was for decades a mostly “nuts and bolts” kind of business now finds itself on the edge of being art. Manufacturers like Kohler have elevated bathroom and kitchen design to an entirely new level and consumers have more decisions than ever to make. Toilets alone come in in more than 4,00 stlyes, colors and types. Bathroom sink choices number in the thousands.

At its heart Johnson-Burks is still a wholesale plumbing supply company. With 25 employees it distributes plumbing supplies to northeast Texas and southern Oklahoma, primarily to plumbing contractors, but also to schools, cities, and industrial businesses.

The company began life as a retail business and later evolved into a supply company. The Burks half of Johnson-Burks left the enterprise in 1929, a year after the company opened its doors, but the Johnson family kept right on going.

Jesse Parrish and Lester Terrell bought Johnson-Burks in 1977. Parrish acts as president of the company and Terrell as vice- president, but the titles are not all that important. Regardless of their titles, Parrish, Terrell, and Corporate Secretary Bula Harris share equally in keeping to the high standards for the company set by the Johnson family years ago.

Over the years, Johnson-Burks has sold everything from standard copper pipes to the occasional bidet.

Plumbing has been around since the Romans. “We have staying power if nothing else,” said Parrish.

Media and advertising has changed how consumers feel about their bathrooms and kitchens. For decades those were two small rooms in the house, but with architectural changes in the early 1950s, homeowners began to want more room in their personal spaces.

Over the years Johnson-Burks has added much more display space to its warehouse locations—consumers want to see and touch, the sinks, the toilets, the fixtures. Contractors can send their clients to Johnson-Burks to see what’s available. Consumers are more aware of what used to be purely utilitarian fixtures. In fact bath and kitchen hardware has been elevated to an art form.

Herbert V. Kohler, Jr., the 68-year-old CEO and grandson of the founder of Kohler Co., the Wisconsin-based maker of plumbing fixtures, sells image as much as hardware. The company even has artists-in-residence who have helped create advertising and retail store design since 1974.

The average amount invested in a luxury bathroom has doubled to $33,000 in just five years. A marble “Botticelli Vessels” sink retails for $2,750—contrasted with a basic white drop-in sink for $154 at Home Depot., also manufactured by Kohler. And while inventory requirements are rising, the up-trend is good news for Johnson-Burks.