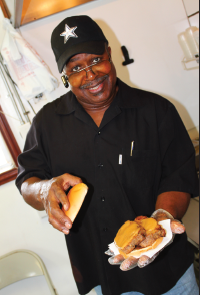 The building at 2921 South Eisenhower Parkway in Denison has seen more than a few barbecue and hamburger stands rise and fall in the past few years. (For quick a reference, that’s near B&N Music, across the street from Team Bonner Chevrolet on Spur 503.) Edd Fleming and his nephew Marvin Fleming have been there for about a year, and it looks as if they are settling in to stay.

Now, what about the jawbreaker of a name? “When we started out, we were mobile, but now we’re a fixed operation,” said Fleming. “In the future we’ll go out again and do our catering on the spot.” For now, Fleming fires up twin smokers with an unusual conformation to cook his barbecue. The smokers have outside fireboxes and vent the heat though the cooking chamber through large pipes. Other pipes carry the smoke, and Fleming can fine tune both the fire and the smoke to his specifications. It’s taken him almost a year to figure it all out to his satisfaction.

Fleming is a Denison native, who lived in Dallas for thirty years and worked as a data processor for several large banks. His cooking experience was strictly backyard until he came back home. As a kid, like so many other Texomans, Fleming made regular trips across the river to feast on barbecue with brown gravy sauce created by the legendary Po Sam, so it was natural that when he started his business, he would try to replicate what he remembered.

“When we started, we figured we needed something special, so we decided to come with a gravy sauce,” said Fleming. “We can’t know what Po Sam did, so we came up with our own version with our own ingredients.” But gravy sauce isn’t Fleming’s only unusual item. When was the last time you had smoked bologna, smoked summer sausage, or ugly cake? Those items all appear on the menu, along with brisket, chicken, ribs and old fashioned hamburgers.

It was the consensus of the judges who ate at Edd’s that his signature offering may not be the standard items or even the unusual ones, but something as down home as it gets—smoked meatloaf, with a big dollop of brown gravy sauce of course. “I had never heard of a smoked meatloaf, and I wondered how smoking it would change the flavor. Well, it changed it pretty dramatically. We use a family recipe, put it in a loaf pan and put it in the smoker. It takes from three and a half to four hours, and we try to cook it a little slower than the other meats.”

We would be remiss if we didn’t mention Edd’s potato salad. It’s way more than just good. “I can’t take credit for that,” Fleming said. “My mom makes the potato salad, and I’m not quite sure everything she puts in it.” Oh well, even the closest of families have a few secrets.

Mom’s potato salad is at the heart of what Edd Fleming wants to do with his cooking. “I like to see the people smile when they eat the food. I want my food to taste like what I remember as a little boy.” And that touches another point. “Barbecue is serious business. It has to matter to you if you want to make good barbecue.”