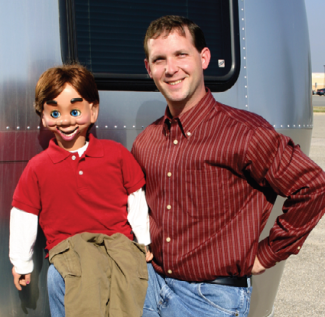 “These are dummies I’m almost finished with,” he said, picking up what will eventually become “Clappy,” one of his more popular characters—so popular he even turned down a shot at Hollywood. All the heads are on sticks, evoking comic book memories of luckless adventurers who met dismal fates in distant jungles.

Cowles, based in Sherman and owner of The Dummy Works, is one of three professional dummy makers in the country. He is also a ventriloquist who hits the road nation wide with his wife, Amanda, a professional puppeteer.

Though most of the build process happens in his shop at home, Cowles does some detail work on the road. Pulling the hair off one dummy (yes, dummy is the proper term) he takes a screwdriver to the back of its head.

Cowles chats amiably as he prepares to reveal inner workings that help bring the character to life. “This was a dream of mine,” he said. “I started ventriloquism when I was twelve. I’d always wanted to go full time because I always saw the response people had, forgetting their day’s cares.”

A few twists later, the back of the figure’s head pops off. Inside is a network of pulleys and taut strings. This top of the line model includes wiggling ears, blinking eyes, and caterpillar sized eyebrows that move up and down to make flirtatious faces at female audience members, all done with the gentle tug of a fingertip.

Seven small levers at the base of the stick make the dummy come to life. “Some people will create a museum look, where the character looks like a real person. We keep a puppet look; the big eyes, big nose, big ears,” Cowles said, as he moves the figure’s eyes back and forth and sets its ears to wiggling.

When he is not making characters or traveling to perform at conventions and churches with Amanda, he teaches folks how to become ventriloquists. The Cowles are the official caretakers of a method popularized by Fred and Madeline Maher in the early 1930’s in Detroit. “Maher Studios was open for 36 years,” Cowles said. “The Maher Home Study Course of Ventriloquism was the only school of ventriloquism you could graduate from.”

The Maher torch passed to a family in Colorado, who in turn passed it to the Cowles. In addition to the original print course, DVDs and CDs are now available to learn the art of vocal illusion. They even give private lessons. “A woman from Kansas is coming in soon to take the course,” he said.

“Every figure you create is special,” Cowles said as he picked up Hickory, the dummy he uses in performances. “It’s like one of your kids. When it leaves your shop it’s an inanimate puppet, but when it’s placed in the hands of a skilled ventriloquist, it comes to life, they breathe life into it. It’s interesting to see the personality they put into that character, different than I would have done.”

So have any of his “kids” embarrassed him? “At times, they’ll say something I never would have had them say,” he said, turning a light shade of red.

“We were contacted by the director about a role for Clappy,” Cowles said by way of explanation. “They had seen him and wanted him in the movie called Ten. It was a mock of the Ten Commandments.” Mocking the Ten Commandments made Cowles and his wife uncomfortable enough. Then they got the script.

“The character was, uh, ‘with,’ Wynona Rider, I don’t know how to say this politely,” he said, fidgeting. “She was having relations with the dummy; she was having an affair with him. We told them ‘we appreciate you calling us, we thank you so very much for doing that, but in this case we don’t think so.’”

That shot at Hollywood could have got Clappy and the Cowles plenty of notoriety and immediate monetary gain. Saying, “…we don’t think so,” got them noticed by the New York Times, which ran an article on the snub of Wynona. Papers in the United Kingdom picked the story up, and positive press showered on the Cowles. New orders for dummies rolled in, creating a 180-day backlog. Saying “no” proved wiser than “yes.”

The Cowles are no dummies.

2 thoughts on “The Dummy Works”