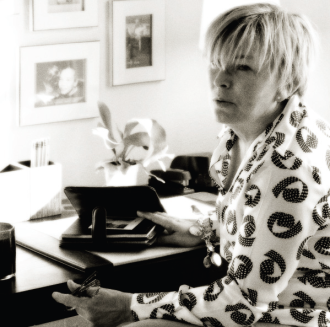 Lawrence and Phyllis Davis searched for their dream home for several years. They were first drawn to the charm and character of older houses, but were quickly disenchanted by the old plumbing, old wiring and old windows. They considered building a new house but couldn’t find the right lot. They were patient. They knew the right house would eventually come along.

When the Davises heard that the house on West Belden was for sale, they arranged for a time to view the house and immediately fell in love with it. They asked their friend Peggy Braun, an architectural designer from Whitesboro, to look at the house and give her opinion. She realized at once that with certain modifications the Davises could finally have their dream home. They promptly purchased the house and prepared for the renovation process.

Lawrence and Phyllis spend a lot of time in the kitchen, and they both enjoy cooking, so a lot of time went into planning a kitchen that incorporated modern conveniences with a focus on minimalist design. For a state-of-the-art kitchen, they looked to the past, to classic white cabinetry, glazed subway tiles, honed granite counter tops that replicate the look of soapstone, and stainless steel appliances. These things make good sense now, for the same reason they were favored then—durability.

Phyllis wanted the subway tile backsplash to be installed counter to ceiling with no upper cabinets, and she wanted to enlarge the window that opens to the herb garden. Her contractor questioned the lack of upper cabinets, but Phyllis was insistent. Instead, a large work island full of drawers and a floor-to-ceiling dish armoire added the storage needed and allowed ample space for Lawrence and Phyllis to cook together comfortably. The screen door on the pantry is another fun detail that was custom built to replicate design details from the original leaded glass doors and windows, complete with a spring closure that “slaps” when it closes.

With the renovation complete, the home is very inviting and definitely reflects the personality of the Davises. They were able to remove and reuse some of the existing brick, incorporating it into the addition, and used stucco to match the existing stucco on the exterior of the upstairs. They installed French doors leading out to the patio, installed red brick steps, and increased the patio space that leads to the pool. It is very challenging to add on to a house of this age, without changing its original look, but they pulled it off .

Needing to have wrought iron fencing installed to accommodate their dog, Gus, they repeated the design of the leaded glass windows in the gates that lead into the back yard. They also hired landscape architect Willie Steele of Sitescape to create inviting outside spaces and patios that remind you of a trip into a Hollywood back yard of the 50s. The oversized corner lot (just over half an acre) had plenty of room for the master suite addition, as well as a back yard ample enough to incorporate a basketball court for their son Walter. An old shuffle-board court had once been there. 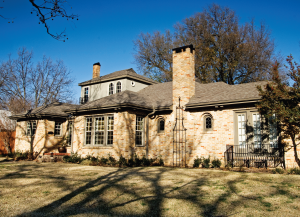 Many longtime locals know the house at 325 W. Belden as the home that held the dinner party in 1939 where the guest of honor was Eleanor Roosevelt. The First Lady was the guest of Mrs. A.I. Ridings.

Some of the unexpected elements that preserve the authenticity of 325 W. Belden Street:

– Master tub faucet that comes up from the floor, complete with handles that are mounted on the floor.
– “Friends Entrance” on Alexander Street.
– Leaded glass windows, some original and some created by Jack and Pat Pierce, replicating the design.
– Original leaded glass doors leading from the living area into the gallery hall, which is full of art and books.
– Refinished hardwood floors throughout and matched in the new addition.
– Original cast stone columns that lead out to the pool area.
– Original front door, refinished, with its leaded glass window replaced.
– Iron spindles in a stairwell.
– Trim painted darker colors than the walls.
– Doors in both the original house and the addition have no casings. They were installed with round corners, a European design.
– Finally, adding a modern note, the house is now wired for music, with the likes of the Beatles or Lyle Lovett usually playing.