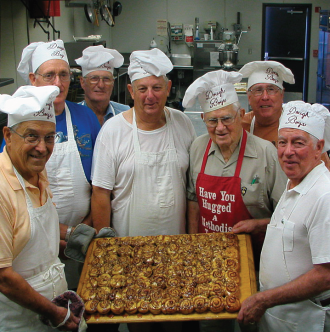 The timer goes off with a “ding,” the first batch of caramel rolls emerges from the oven, and the kitchen fills with the delicious aroma of cinnamon. A pair of bakers flips the sheet pan upside down on a board, and warm caramel oozes down the sides of the rolls and glistens on the top. Using their fingers, the bakers spread white icing over the warm rolls, and the icing, thick and sugary, melts and slips into the crevices to mingle with the buttery cinnamon.

Now comes the hard part, the part all the Doughboys have steeled themselves to undertake, like it or not—quality control. “We believe in a lot of quality control,” says Ted Nurre, as he juggles a hot caramel roll and pops it into his mouth. His next remark is lost in the chewing. All the Doughboys gather round to sample their creations, and the consensus is that they have done “a pretty piece of work.”

If you come to three sessions in a row, you get a hat. As if that were not enough incentive, you get to take part in “quality control” testing. What’s not to like? That’s why a dozen or so volunteer Doughboys show up at the First United Methodist Church in Sherman once a month or so and spend the morning baking.

“Gil Fleer started the doughboys about ten years ago,” said Richard Spicer. Spicer is currently the head baker of the group. “Gil moved to Missouri a few years ago, and they asked me to step up, but we’ve still got a couple of the original members, Ted Nurre and Herman Stoner.”

Fleer was the only doughboy with bakery experience when he started the group, but with these retired Methodist men, he found quick learners with willing hands. “We started out with eight. Now there are twelve of us,” said Stoner.

The faces under the bakers’ hats change from time to time, but the close-knit dynamic of the group goes on. It is as much about the fellowship as the food. It is a nice way to spend a morning, and the church derives considerable benefit from their efforts. The sweet goods fill the spot between the early church service and Sunday School, and the hot rolls and bread round out dinners that church groups put on.

In the past, the Doughboys have catered full-course meals for up to 300. Bill Cain figures that is why Habitat for Humanity asked the Doughboys to cater the upcoming volunteer appreciation dinner. “We did it last year, they liked it, and they asked us to do it again.”

Regardless of what is on the day’s work sheet, the Doughboys always bake bread, and when the loaves come hot from the oven, there is a scramble for a knife and butter. They have a song too—“We Are the Doughboys,” sung to the tune of “You Are My Sunshine.” The Doughboys will break into the song at the drop of a baker’s cap, but their talents, of which there are many, alas do not extend to close harmony singing, so it is a good thing they can cook.