“I grew up with a fascination for collecting toys. When you look around, you find a lot of toy objects. I got to thinking about them as alive, and they were animate and they could talk and tell stories. I began to paint collections of them as toyscapes and gave them unworldly backgrounds.” 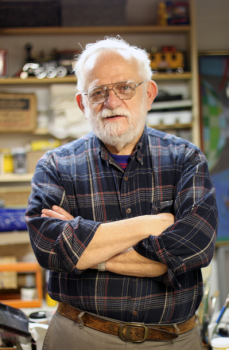 Durland takes more than toys as subjects for his often edgy, slightly disconcerting paintings. “I have, I guess, what you might say is a broad interest and do a variety of things and subject matters. I haven’t classified anything that I did at all. It all has the flavor of whimsical and imaginary and fantasy. Much of it is stylized. I really don’t do non-objective, totally abstract art.”

A retired professor emeritus from the Department of Art at Texas Tech, the Illinois native and his wife Suzanne, who is also an artist, working in small sculpture and jewelry, spent a dozen years in Oregon, before coming back to Texas and Denison nearly two years ago to be near family. The new environs brought on new subjects for Durland’s canvasses.

“I enjoy the waterscapes around this area and Lake Texoma. There’s a lot of wonderful sky here, so dramatic and forceful and dynamic. It intrigues me. I tend to do things in series of a kind and explore that vein, and when I become less motivated I move on to do something else. Sometime I will re-visit [a subject] when I’ve been way from it for a while and I can come back with new insight and new inspiration and new energy.” 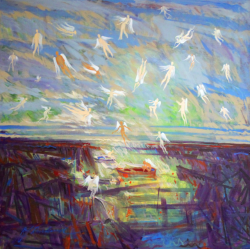 Looking back at his body of work over his career, Durland takes special pride in a series of anti-war paintings which were influenced by the television images he saw during two Gulf Wars. The paintings were exhibited at two showings in Oregon. “They were not necessarily pleasant, but they were very moving to people who commented to me about them.”

Durland’s work will be on display this spring at the Light Gallery in the Katy Depot in Denison and this fall at the Mary Karam Gallery in Denison.

In another life, Reba Browning was an educator, working with children as a teacher and principal. Her husband, Glenn Spelis, was a U.S. Customs agent, a pilot who flew across North America and South America pursuing drug smugglers by air. Today, they have a new life, working together to create sculptures that enhance their environment.