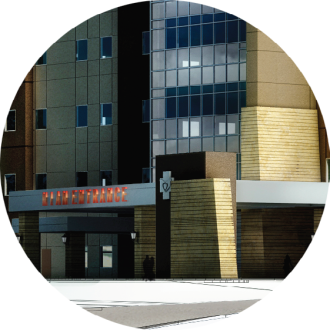 In the time before the freeways, automobile travelers entered Sherman and Denison on city streets lined with tall trees and stately houses. Our city centers were marked by civic buildings, town squares, and church spires rising up out of park-like groves. This rich architectural heritage, coupled with our location among the rolling hills of the Cross Timbers, created a unique identity for the two towns.

With the advent of the freeway and the suburban sprawl that followed, the landmarks that once identified our towns gave way to billboards, gasoline signs and the confusion of bright lights hawking services to the speeding traveler. Sherman and Denison are now identified by our new “town centers,” typical retail developments at intersections along the US 75 corridor.

The new eight-story TMC tower at US 75 and FM 691 will once again change the face of Texoma. Angela Lee, design director for the project and vice president at HKS, understood the impact the building would have on the site and our community. She based her design concept on the development of a gateway icon for the cities.

“We wanted to introduce a sense of arrival, not only to a cutting edge healing environment, but also to the gateway to the city,” said Lee of her company’s initial concept for the building when Universal Health Services, Inc. approached them with the project. Presentation of the facility designs to the TMC staff began the process of designer/user refinement that resulted in the final product. “The best projects always emerge when there is extensive user group participation in planning and design,” said Lee. “It has been a pleasure working with the TMC team, from the decision makers and users to volunteers and patients’ families.”

The final design is a steel structure oriented at an angle to the freeway. A covered drive marks the main entrance and relates to a central vertical volume clad in glass and metal panels that will house the building’s handicapped-accessible rooms. The remainder of the tower will be sheathed in E.I.F.S, a composite material that includes a thin plastic foam layer covered by synthetic coatings in earth-toned colors. Texas limestone at the entrance, will introduce natural materials at the human scale. Upon entering the living-room-like main lobby, visitors will experience a fireplace, a water wall, and a coffee bar, all features intended to make visitors feel at home rather than in a hospital.

“Views are provided from all patient rooms, and natural light is brought into the facility wherever possible,” said Lee. For example, the surgery-area corridors on the hospital’s second floor have walls of glass to the east, an uncommon feature for such a setting. In hospital design, surgery spaces usually are pushed toward the interior of the building where climates can be carefully controlled. This results in dark corridors with no connection to exterior spaces. At TMC, both patients and medical professionals coming out of surgery will immediately have views to the exterior. Research has indicated that contact with nature has a healing effect on recovering patients.

The floor plan is clear and rational, making way-finding easy for employees and visitors. In the future, a medical office tower will connect to the main hospital, with an outdoor plaza adjacent to the hospital cafeteria. HKS worked with hospital employees to develop the details of the building, down to electrical outlet locations and furniture layouts.

Tally Associates is the landscape-architect company for the project. With the landscape currently in the design phase, Tally’s goal is to use plants native to Texas to re-develop the site, which was cleared of all natural vegetation. Of concern to an organization abandoning a mid-century building is whether or not the new facility will stand the test of time. The designers planned for a future expansion of the patient tower to serve the growing needs of the facility.

Only time will tell if this new gateway icon will be valued by our citizens for years to come. Located at the midpoint between Sherman and Denison, this development can be seen as a new center for the two towns rather than as a gateway to either. If the trend of development over the last half century is any indication of future development, we may soon have yet another city center somewhere else on the periphery, another new face for Texoma.

If you have ever shared an office workspace with women of childbearing age, you will no doubt be familiar with the office baby shower. This is not a suddenly put together affair, but one that occupies hours of planning and coordination on the part of the shower givers.

Take a lazy drive on a clear Sunday morning in Grayson County and you may be surprised at what is in your backyard. Tax rolls show more than 100 ranches in the county.