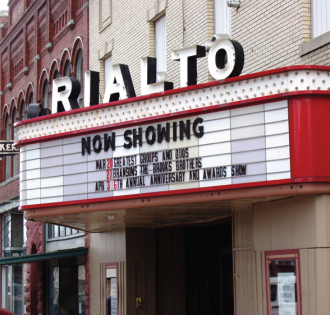 The Rialto Theater on Main Street in Denison opened on August 4, 1920, and was hailed as “Theater Beautiful.” Talkies debuted at the theater in 1929, with Madge Bellamy and Louise Dresser in Mother Knows Best. In 1932, the Interstate Circuit took control and three years later spent $10,000 to renovate the house with a new box office, awnings, carpet, screen, seats and drapes. The Rialto also got new projection and sound equipment and welcomed audiences back to the picture show on February 27, 1935, with The Little Colonel, starring Shirley Temple. Although different companies owned the Rialto and Sherman’s Texas Theater, the two exhibitors had an agreement that they would always show the same movie on the same dates.

The Rialto hosted the Texas premiere of Red River, starring John Wayne in 1948, and moviegoers crowded the sidewalks to catch a glimpse of some of the show’s stars. Not John Wayne, though—he didn’t make it.

The Rialto was quiet until 1998, when Shawnda Rains bought the theater, took it back to its origins as a stage for live performances and started the Main Street Showcase, a weekly musical variety show. The offerings include music from the ‘50s, southern gospel, old and new country music, tribute performances, and comedy.

The Main Street Showcase is more than just a weekly show. In many ways it is a joint effort of performers, sponsors and the audience. “The volunteers and sponsors keep this show going strong,” said Rains. “I could not hope for more dedicated friends. They will do anything and everything that is needed for the Showcase, from running the ticket booth to repairing the air conditioner and helping with physical improvements to the building.”

So congratulations to the Main Street Showcase on its 10th Anniversary and to the Rialto, the last of Grayson County’s monuments to the silver screen, for 79 years of entertainment.