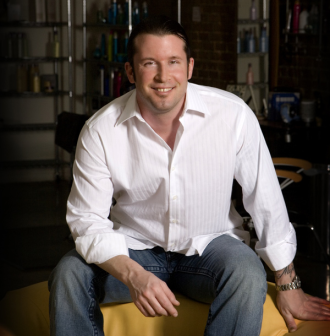 That’s a client like Sandy McCraw-Bean, who is having her hair colored. She describes Garrett as a perfectionist, conscientious, and dependable, before he tells her, in the way only long-time friends can, “Don’t turn your head! You can talk to her without turning your head!” She sighs and tells the wall on the opposite side of the room that Garrett once had a Harley.

He has the kind of good looks of a man who doesn’t work at it. His dark hair is captured in a pony tail at the base of his neck and his attire is unstudied. OK, stylishly unstudied if you must. His shirt sleeves are rolled up, revealing a tattoo too intricate to make out with a casual glance except for the word “Major.” Major is his two-year-old son.

Major Patton was a preemie, and because he was so little, Garrett and his wife, Janetta, figured he needed a big name. “My son was born at 24 or 25 weeks and weighed one pound, 14 ounces. It’s weird. His birth was the most incredible thing, but I was so afraid he was going to die. So I tried not to get too close to him, but with every thing I did, he drew me closer. Now he’s great. I can come home after a cruddy day and he’ll come running up to me yelling, ‘Daddy! Daddy!’ He’ll crawl all over me and I’ll get my second wind.” There is a pause. “I like being with my family.”

The recuperation time is important when you work a lot, and Garrett works a lot. One customer, who defected from her stylist of 20 years to benefit from his expertise, asks that her name not be used, for reasons obvious to those who carry that burden of guilt. “He has an unbelievable work ethic,” she says. And then adds, “He works really HARD,” for emphasis.

The commitment came when he launched his own business. “It was probably the sink or swim aspect of it,” he said. He’s been in his current location on Houston Street, just west of the courthouse square, since October 2004. The thriving salon includes three other stylists in a large, almost austere room. “I don’t like ego, but in this profession you encounter it a lot,” Garrett said. “Everyone has some sense of ego, of course, but I like to work with people who are like family. I’m in no hurry to fill the shop.”

Garrett’s skills have garnered him a growing reputation locally. He attributes those skills to the people he worked for and with during his early days in the business—Kevin Roarke and Dennis Motes. As a 19-year old apprentice at Kevin Company, he was “the baby,” and he admits that the staff sometimes gave him a hard time. “Kevin was like a father and really took me under his wing. He’d yell at me when I needed it and praise me when I needed that too.” Dennis provided the motivation to keep Garrett learning and working hard.

“I think we take a little bit of what we learn along the way, and then modify it to work for us,” he said. “I’m only good because I’ve been around others who selflessly taught me everything they knew.”

Garrett still hasn’t eaten lunch, but he starts to work on a man in the chair. “I don’t cut kids’ hair other than my son’s,” Garrett says, as though he’s compelled to relay some shortcoming.

“You’re cutting mine,” the man says. It’s a wisecrack that doesn’t make that much sense. 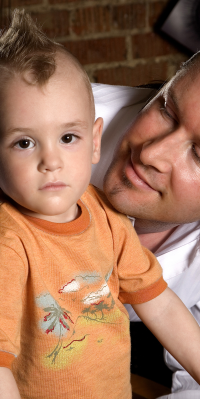 “Yeah, well, you’re my cousin,” Garrett responds, never losing the rhythm with his scissors, and cutting his cousin a little slack along with his locks.

When asked about the rest of his family, Garrett described his mom as a hippie and his dad as a military man. When he left the service, he became a traveling salesman who spent a lot of time on the road. “His coming home on weekends was what mom used to threaten us with when we misbehaved. And I was good at getting in trouble.”

He was also good at art. Once when his mother punished him for some childhood transgression, he was made to sit, almost literally, at her feet for what seemed like hours. She was an artist and on that occasion there was a bit of her clay within reach. Garrett bided his time by sculpting a skate board. She was impressed he said.

“I have ADHD and my mom was kind of a naturalist who helped me a lot,” said Garrett. She taught him to pay attention to his breathing and concentrate on his thoughts. He still practices those techniques to stay focused. She is deceased, but her son still senses his mother’s presence. “She had such an ability to listen. It changed me completely. She could help me reach a decision about some problem mostly by listening, and by barely saying a word.”

When Garrett’s college grades were not as expected, his dad cut off the money tap. “I started racing cars and cutting my friends’ hair,” he said. In time the racing ended, but with hair styling, Garrett had found a calling, although perfecting his craft on friends and relations wasn’t always easy. “Sure, they were critical—friends and family are always your toughest critics—but I enjoyed it. Now I have customers who are ex-hair stylists, which is really an honor because these people were once my competitors.”

He shrugs his shoulders and says that strange is in the eye of the beholder. “For instance, if a person is really conservative, then going a little out toward the edge is strange.” But he does have limits and his bottom line on weird hair cuts is simple. “If I don’t want my name on it, I won’t do it.”

Grayson County is not exactly on the cutting edge of fashion. Garrett figures we’re about three years behind New York or LA. “Usually, it’s the younger people—the college crowd —who bring new styles to a community; pop culture is a big influence too.”

So what is it about Texas women and big hair? His frustration with that question is evident. “It’s such a cliché—big hair and platinum blondes, Texas is a wonderful state with great people and a variety of cultures,” he says a little defensively. “But it’s hard for people to break out of habits when it’s what they’ve been doing for a long time.”

He attributes our stubborn adherence to football-helmet hair to fear. “I try to help ease people into a style change without making any hasty decisions,” Garrett said. “I make little changes in steps and keep listening, so I get a sense of the person’s personality and what will work for them.”

The anonymous defector mentioned earlier agrees that Patton considers personality along with the shape of the face and thickness of the hair. “He’s very honest about what looks good on you. The more he gets to know you, the better your haircut gets.”

Garrett always works to help clients look their best, but he shies away from any suggestion that he is extraordinary. “Sometimes in this business, you get a reputation as a miracle worker when it just isn’t true,” he said. “I think skilled hair stylists are good listeners. If I don’t think something will work, it would be a great disservice for me to do it.”

By now, Sandy’s color is about done and she’s back for her turn in the chair. Garrett still hasn’t had lunch. Although he works only five days a week now, he admits that he and Janetta haven’t been on vacation since before his son was born. Maybe, he suggests, it’s that she likes beaches and he wants to go to Prague. Prague? “I heard that it is almost untouched since World War II,” he says admiringly. “I think the beauty of that and the history would be awesome.”

When he is not on vacation, Garrett likes to spend time in the crease. That’s the box on the ice in front of the goal. He’s the goalie for a Richardson ice hockey team. He started out on wheels, as part of a group that started playing hockey at a roller rink in Denison. “I wasn’t a very good skater, so one day I put on the pads and let people start shooting pucks at me,” Garrett said. He and some teammates tried out and won spots on an ice hockey team called “The Hangovers.” 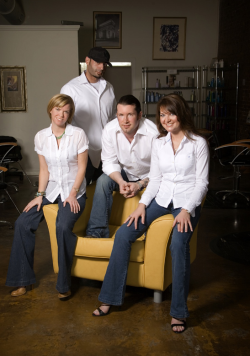 Garrett also enjoys hunting and fishing. “We have a farm out by Hagerman. I work hard to manage the land well. I’ve probably passed on 150 deer over the last few years.” The recent drought has been hard on the fishing ponds, but that hasn’t stopped Garrett from wetting a fly now and again. “I loved the movie, A River Runs Through It, and fly fishing is just as cool as that,” and then he brags on Keith Kimberlin for teaching him to fly fish.

Garrett is happy right where he is and hopes to keep doing exactly what he’s doing now for a long time. “I’m happy, but often bored. I’m happy in what I’ve got, but have a hard time settling. I’d like to learn to be more patient, but I’m just an instant gratification kind of guy.”

It’s the middle of the afternoon, and still no lunch. Right now, instant gratification would be a sandwich. That’s not asking too much is it?