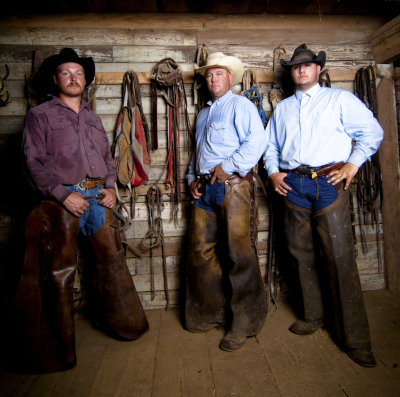 The alarm sounds at 4am. In a dimly lighted barn the horses are fed and saddled, the stalls cleaned, all before the light of day, all before the real work can begin. The mornings may be routine, but the rest of the day is far from it. Clay Lowrey wouldn’t have it any other way.

A cowboy his whole life, Lowrey thrives on the variety of the work. The best part of a cowboy’s job, he believes, is that it’s never the same thing twice. Lowrey is what’s called a “dayworking cowboy,” or a cowboy who works for area ranches as he’s needed.

One day he may be called to a place in Bells to help gather, sort, and ship yearlings (one-year old bulls, steers or heifers) and the next he’s outside of Paris catching a wild cow that broke out of her pasture. Lowrey may revel in the variety of the work, but more so he’s drawn to the thrill of the adventure. “It can be unpredictable,” he said. “You have to pay attention all the time when you’re working with cows because they’re also thinking for their selves. Part of a cowboy’s job is to out-think them. If you don’t stay a step ahead of them, that’s when you get hurt.”All because of cowboying, he’s had two major surgeries, broken ribs, and all the scars to remind him of the hard knocks. But none of that has reined him in. “If a man could make a living just catching wild cows,” Lowrey said, “that’d be where I’m at!”

Knife maker Travis Payne feels the same way. “I may wear shorts and t-shirts half the time but when it comes down to it, I’m still just a cowboy. It’s the way you live; it’s so much more than working cows all day.”

There is little distinction between being a cowboy and working as a cowboy. A true cowboy isn’t just doing a job, but living a lifestyle. It’s in the way a family is raising their children, it’s in a man’s work ethic, it’s how neighbors help neighbors. Lowrey and Payne were both born into this lifestyle, as were their fathers, and their fathers, before them. And now they’re raising their children the same way.

Growing up on the Payne Ranch in Telephone, TX., some of Payne’s fondest memories are of taking lunch to his dad and granddad out in the field when they were plowing. “They’d crawl down from the tractor for 20 minutes,” he recalled. “We’d have a Mason jar full of tea and a sandwich and, we’d have a picnic.”

Like many youngsters in ranching families, Payne was just two or three years old when he learned to ride and rope. “I’ve been in the saddle as long as I can remember,” Payne said.

Payne’s passion now is crafting tools for those who make their living in the saddle. He started making knives as a hobby in his teenage years and soon had enough requests from friends and friends of friends that he established T-Bones Custom Creations. He custom-makes steak knives, hunting knives, and castrating knives. The castrating knives are most significant to him. “I keep the price for those low so that the working cowboy can afford them; it’s a tool that they have to have.”

A castrating knife barely scratches the surface of the equipment a working cowboy needs to make a living. Besides the obvious horse, trailer and pick-up, there could be a couple thousand dollars in a saddle, several hundred dollars in tack, blankets, ropes and other miscellaneous gear, all which need periodical repair or replacement. And then there is the feed bill and the vet bill, which is no small sum. “There’s a serious amount of expense in being a cowboy.” Payne went on to explain, “But you have to spend it. You don’t see it as an option. It’s like a pickup or breakfast— you just have to have it.”

A typical day-working cowboy’s wage in Texoma is $125 a day. (That could be a six hour day or a twelve hour day, as long as the job gets done.) Once you consider that a cowboy supplies all of his own equipment to do the job, there is a lot at stake. “If I ruin any piece of my equipment while I’m at a cow job, I’m in the hole for the day,” Lowrey explained.

Full-time cowboy Casey Walton works for Schoenig Land and Cattle Company in Honey Grove, Texas. He doesn’t just work at the ranch, he lives on the ranch. Only the larger ranches these days are able to offer their hands housing in addition to their wages. It’s an advantage to the cowboys as well as the ranch owner. The cowboy benefits financially while the ranch owner has a hand who is onsite 24/7 to deal with whatever calamities may arise. “We’ll have to go check cattle two to three times overnight during calving season. That’s one of the times it’s handy living right on the ranch, being so close to what’s going on, but it can have it’s drawbacks at times too,” Walton said.

A day in the life of a real working cowboy like Walton or Lowrey would be exhausting to most regular folk. It’s one of those jobs that has to be done regardless of the circumstances. There are no sick days; the cattle must be tended to even when the flu bug has bitten. They are on call 24 hours a day and often roused from their beds to “pull a calf” or ward off some belligerent coyotes. Federal holidays don’t apply to cowboys; livestock have never scheduled their feed or health according to a calendar. A working cowboy has to endure long days in the most frigid winter conditions, and here in Texoma, endless summers of seething hot temperatures. Aside from the unrelenting schedule, the work itself can be grueling.

Lowrey described it as “backbreaking,” an apt choice of words for a horseshoer. But that physical work is part of what he relishes. He and Payne agree that there are some times of the year in which the work is less intense. But truth be told, slack time for a cowboy is probably still more work than many of us care to take on. “Spring works is by far the hardest time of year,” Payne said.

Spring works is done after all the cows have calved out. The cows are doctored and the new babies are ear tagged, branded, and castrated. It makes for enduring days for ranchers, ranch hands and dayworking cowboys. But everyone on the ranch is expected to participate in some capacity, including the women and children.

This isn’t just true for spring works or fall works or any other working event. Cowboying is a way of life for the entire family. Often the wife of a cowboy will have a “town job” and bring home a steady paycheck, but on evenings and weekends you can find the entire family patching fence and checking their cattle together. “The funnest times I have is when my whole family is out working with me,” Lowrey expressed. “There aren’t many jobs in this world where a whole family—kids included—can get out and work together, but cowboying is one of them.”

Payne said, “It’s one thing for two people to go to a job each day and bring home their paychecks. But it’s another for both of you to be side by side, sweating and working for the same goal—literally building your future.”

Working together as a family teaches the children so much at a young age. Lowrey’s sons are 7 and 5 and already they are cleaning stalls, feeding the horses and going with dad to check cattle. They don’t realize it, but because they are starting so early, they are developing a stronger work ethic for it. “It’s teaching them how to work. They’re learning responsibility, right from wrong, that they gotta get up in the morning and feed because those cattle are depending on us,” Lowrey said.

At the end of the day, after the work has been done, the horses unsaddled and fed, these men relish in the fact that they can look out in the pasture and see what they have accomplished. The calves are thriving, their mothers are healthy and fat and grazing on lush green grass, all securely confined by a sturdy barbed wire fence. “Every morning I look forward to taking my cup of coffee out on the front porch and looking out to see what all I’ve done, and visualizing what I’m going to do tomorrow,” Payne said.

“Cowboys are a dying breed,” said Walton. “This lifestyle isn’t for everyone, but for me there is no better way to live.”

Lowrey may have summed it up best, “It’s a hell of a hard way to make a living but it’s a good way of life.”

Travis Payne grew up on the Payne Ranch in Telephone, Texas. A family operation, he started pitching in and learned cowboying at a very early age. Like most country boys, Payne spent much of his spare time hunting and fishing. When he paired that enthusiasm with his budding skills as a craftsman, he developed a keen ability for knife-making. Once his knives started getting passed around and word spread, it became clear that knife-making didn’t have to just be a hobby. Although he will always be a cowboy at heart, Payne now puts his sweat and dedication into T-Bone’s Custom Creations.

Casey Walton is a West Texas cowboy. His dad and granddad taught him the ropes on their 2,000-acre family ranch in Clyde, Texas, just outside of Abilene. Walton never doubted that he was meant to be a cowboy. He worked at a few area ranches before he was recruited to cowboy in Texoma while he finished college at Texas A&M University-Commerce, where he met his wife and earned his Bachelor’s degree in Ag Science and Technology. Walton is now a full-time ranch hand at the Schoenig Land and Cattle Company in Honey Grove, Texas.

Clay Lowrey was raised in Bonham, Texas. After he graduated high school, Lowrey spent time dayworking for local ranches in between travels to ride in the rodeo where he competed in bulldogging. When it was time to let the dust settle beneath him, he went to the Texas Horseshoeing School and became a professional farrier. Lowrey Horseshoeing was established in 1995 and continues to be a significant contributor to Lowrey’s livelihood. In addition to shoeing horses, Lowrey is a dayworking cowboy, rides colts for the public and tends to his cows on his own place in Lamasco.

4 thoughts on “Cowboys at Work”