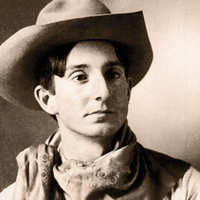 “He was just a local fellow who took pictures. He never really amounted to much.” If you asked the old men who gathered on the bench on the south side of the courthouse in Bonham in the 1950s to chew tobacco, whittle, and tell the stories old men tell, that would have been their general recollection of Erwin Evans Smith. But there was more, of course. With an infinite patience, and an Eastman screen focus Kodak camera fitted with a Goerz lens with a volute shutter, Smith captured the real image of that most universally recognized of American symbols, the cowboy.

That was not his intention, at least not in the beginning. He wanted to be a sculptor and reproduce the West in bronze, but he never quite got there, and somewhere along the way, the legacy he left was almost forgotten.

Before one of his summer trips to West Texas, Smith got a simple box camera and began taking pictures of the things he saw. He would bring the exposed film back to Bonham, where he learned to develop and print the pictures in a home darkroom.

Smith latched on to the big outfits, riding the range with hands from the Shoe Box, the JA, the Frying Pan, the Matador and the LS ranches. He worked the Palo Duro and the grassland along the Canadian river and spent time with the cowboys in Old Tascosa, a fading cattle town whose dusty streets had once been marked by the boot prints of Billy the Kid, Pat Garrett, and Charlie Siringo.

Over the years, he made several attempts to use the photographs in projects, but none of the efforts amounted to much. At his death, Erwin E. Smith was, in the minds of many like the old men around the courthouse in Bonham, “just a local fellow who took pictures. He never really amounted to much.” But there was more of course, so much more.

1 thought on “Cowboy with a Camera”

Area firefighters protect life and property. Get an up-close introduction to our local fire departments.