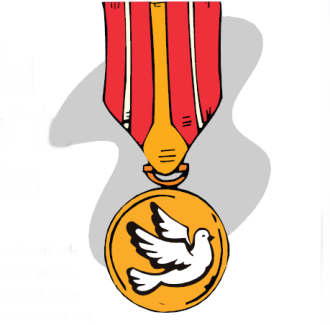 In World War I and World War II, carrier pigeons played a vital role in communication across Europe’s battlefields. In WWII, pigeon handlers used quarter-ton mobile combat lofts that could be moved quickly by Jeep. The pigeon lofts moved as the lines moved, so that units at the front could send back urgent news from the battles.

In 1918, a French Black Cock pigeon named Cher Ami (Dear Friend) saved the lives of several hundred doughboys in the Lost Battalion of New York’s 77th Division. With the unit cut off and surrounded by the Germans, American artillery was unknowingly shelling the battalion’s position. Cher Ami, the last pigeon in the loft, was released with a message to quiet the guns. “We are along the road parallel to 276.4. Our own artillery is dropping a barrage directly on us. For heaven’s sake, stop it.”

Cher Ami went back to America with a French Croix de Guerre with Palm Leaf and a hero’s welcome. He died in 1919. His remains are on display along with his medal at the Smithsonian Museum in Washington.

Unbeknownst to the air force, the Germans had already retreated, and the British troops had entered the city with little resistance. All attempts to cancel the bombing through radio and other means of communication had failed, so G.I. Joe was released with the important message to cancel the raid. He flew a mile a minute for twenty miles back to the airfield, arriving just as the bombers were beginning to taxi to the runways. G.I. Joe was awarded the Dickin Medal for gallantry for saving the lives of 1,000 British soldiers.