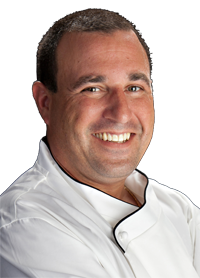 By all rights he should have been a lawyer. His father was a lawyer, his sister is a lawyer, but Robert Aranson adopted his father’s avocation rather than his vocation and became a chef instead.

“My father loved to cook. I would sit in the kitchen for hours with him just waiting for him to ask me to help stir the next dish. We moved into a new house when I was in high school, one with a big commercial kitchen, and I loved tearing up the kitchen with him. I loved putting different ingredients together and seeing how they turned out. It’s a lot like tinkering; I’m a tinkerer when it comes to cooking.”

Improvisation might be a better term than tinkering when applied to gustatory arts. Aranson likes to improvise. “When I was kid, I liked to make box cakes and cookies. I loved following the directions and was proud when everything turned out just right, but things have definitely changed now. I’m not so big on baking anymore or following recipes. I love to create my own dishes and surprise everyone at the end. Today, when people ask me for the recipe, I sometimes have to tell them ‘I’ll get back to you on that one.’ Nothing is ever the same; it can only get better with tasting and perfecting.”

When he was twelve, Aranson got a job at Big Al’s Smokehouse on Inwood Road in Dallas and got the chance to see early on what the restaurant business looked like up close. That experience plus what he had learned “tearing up the kitchen” convinced Aranson that he wanted to be a chef.

In the past, chefs started in the scullery and worked their way through the kitchen one pan, one sauce, and one technique at a time. The training was long and laborious, but when it was completed, it constituted a complete culinary education, both in cooking and in the management of a restaurant. Aranson started that way right out of high school in a program that combined in-the-kitchen training with an academic side dish provided through the Dallas Community College.

“The Texas Chefs Association placed you into a facility, mostly large hotels where they have a full range of things in their kitchens. I happened to be placed at the Dallas Info Mart, which is a part of the Dallas Market Center, and worked under a great chef who was on the American Culinary Olympic Team.”

Aranson’s combined program, learn about cooking during the day and about English and math at night, worked out great—well, almost. “You were supposed to work sixty to eighty hours a week and then go to school. I did the work part just fine, but when it came time to make school, I was exhausted, so let’s just say I didn’t always make it to class.”
After two and a half years in the program, Aranson was ready to graduate, but he was short credits in the education part of the program. The solution was more schooling, this time at Johnson & Wales University, a private culinary academy in Charleston, South Carolina.

Aranson’s double-barreled culinary education was unusual, but beneficial. “When I went to Johnson & Wales, I could see that what I had done before was definitely the way to go. You spend three years in the industry in a big kitchen, and you learn so much, whereas people who go through the culinary school graduate, and they come out knowing the names of things. It’s a great school, but a two-month internship in a working restaurant would really help.”

Aranson’s hands-on training at the Info Mart taught him everything from how to operate and repair kitchen equipment to how to manage the business end of a restaurant, and that latter talent or skill may be the most important thing of all for success. The food business is like any other. To survive you have to make a profit, and to make a profit you have to buy low and sell high. If good grub were enough to insure success, there would be a café on every corner. There are good cooks in abundance, but good managers are rare indeed.

After graduating from Johnson & Wales, Aranson came back to Dallas to start his career. His first job out school was at the City Café. It was a great opportunity, but it came with dismally low pay, about $7 an hour. Aranson discussed the job with his father, who agreed that the experience would be useful to the young chef and also agreed to augment that seven bucks an hour for a little while.

“I took the job so I could cook with some different foods you don’t normally see, like veal flank steak and lemon grass, foods you can’t buy in the stores. I started out as the sauté chef, cooking on a ten-burner stove. If something was cooked in a pan, I was the man.”

The City Café was followed by three years at the Belo Mansion, a private club for members of the Dallas Bar Association, housed in the former home of the founder of the Dallas Morning News. Aranson had always wanted to work for himself and run his own business and had just about had enough of corporate cookery when he was transferred to the Dallas Convention Center. That was the incentive he needed to kick him into gear. “You would grill chicken for twelve thousand people twelve hours a day,” he said. “I didn’t go to culinary school to grill chicken all day.”

It was 1994, and Aranson was a newlywed. He and his wife, also a chef, were ready to set out on their own. “We were looking for a restaurant outside Dallas and without a Dallas price tag,” he said, so when an associate told them about Kelly Square in Sherman, they took a drive and took a look. “It was perfect and just felt right, and the price was really right. What was also even better, when you opened the phone book there was only one caterer,” said Aranson.

In February of 1995, Aranson came to Sherman to take over Kelly’s Restaurant in Kelly Square and set about putting something different on Sherman’s plate. “Back then you were lucky to do $500 a day at lunch, but the big thing was catering. We put a couple of small ads in the newspaper, and before you knew it, it just took off.”

The Aransons ran Kelly’s very successfully for eight years, until someone made them an offer they couldn’t refuse. In 2002, they sold the business for significantly more than they had paid for it and opened Culinary Creations, a high-concept gourmet carryout on West Houston. The business ran well for a while, but behind the scenes the Aransons’ marriage was not going as smoothly. When all was said and done, the couple agreed to part ways and move on in different directions and into new phases of their lives.

Aranson decided he would try his hand at something other than cooking and began working for Sysco Food Service, selling to restaurants. He had always enjoyed meeting new people and could talk to just about anyone, so with his experience, it seemed like a perfect choice. “I was horrible at it,” he said. “I thought I’d be great, but my problem was I was still thinking like an operator. I just couldn’t stick it to somebody for a case of green beans. I serviced the accounts they gave me well, but when it came time to get new accounts, I was terrible.”

Meanwhile, back at Kelly Square, the restaurant Aranson had so carefully built up was going downhill. The people who had bought Kelly’s from the Aransons couldn’t make a go of it and went bankrupt. Bob and Honey Minshew, who owned the Kelly Square complex, tried to keep the restaurant running. They hired several different chefs to bring it back, but none of them were successful. Figuring that what had worked once before could work again, Minshew asked Aranson to come back, and the chef agreed.

The decision made three and a half years ago has worked well for everyone. The Minshews got a first class restaurant in their building, Sherman got another chance at Kelly’s signature chicken spaghetti, but Aranson got the sweetest deal of the all. He got to go back to cooking in a situation that meshed very nicely with the most important priorities in his life, his two daughters. “I’m really lucky. Having full custody of my girls and being a single parent, I don’t think I could do what I have to do if I were somewhere else,” he said.

Aranson’s day starts each morning at five. He takes Hailee, eight, and Hannah, ten, to school each morning and picks them up every afternoon. “The girls love hanging out at Kelly Square. They are growing up here and can already tell you just about anything you need to know about the place. They even talk about being chefs someday, but I just say, ‘Whatever.’ Hannah is now at the age where she actually likes to help out around the restaurant, so don’t be surprised if you come in for lunch and a kid with an apron wants to wait on you.”

Many of Aranson’s employees have been with him for more than ten years, something he’s proud of and rates as a huge plus in the success of his restaurant. “I couldn’t do this business without the amazing people I have working for me,” he said. “They read your mind and can interpret any customer’s needs right off the bat. They really take care of our customers.”

Aranson has seen and done a lot in a short time—he’s only thirty-nine—but there is more he wants to do in the kitchen. “I’d love to cook really high-end food with incredible sauces,” he said, and then admitted that Sherman probably is not quite ready for that kind of place yet. That said, he is starting his own reeducation program to bring greater sophistication to Texoma’s palette.

He started with a small taste test in February when he opened Kelly’s for a “Romantic Valentine Dinner.” “It was a great success,” he said. “I think people were surprised that Kelly’s could offer such an incredible menu with Chateaubriand and a blackened Ahi tuna. I’d love to do food like that all the time.