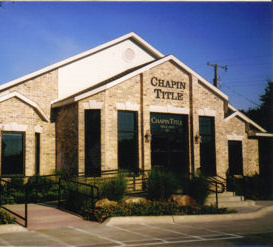 Chapin Title Company traces its roots back to the 1800’s when the city of Sherman was a rural, undeveloped area. The year was 1872, the city of Sherman was booming. Almost 6,000 people called it home, and others were streaming in steadily to grasp the opportunities the rich prairie soil promised. With the increase of people moving into the area, the city needed a way to keep track of the parcels of land being bought and sold. That’s where Chapin Title came into the picture.

A young man by the name of M.J. Chapin decided to keep track of every recorded instrument affecting real estate titles. It was a valuable service that was welcomed. In 1872, M.J. Chapin proudly hung his shingle outside a small, one room office in the Grayson County Courthouse and the company has operated continuously ever since.

At the same time, operating quite successfully in the city of Denison was Tone Abstract Company, also founded in 1872. For 118 years, Chapin and Tone operated under a “gentlemen’s agreement” whereby Tone Abstract handled property in northern Grayson County and Chapin handled property in the south. In 1990, Chapin acquired Tone Abstract Company, and with the merger of the two companies not only brought the resources of two great companies together, but also made Chapin Title the largest title company in Grayson County. 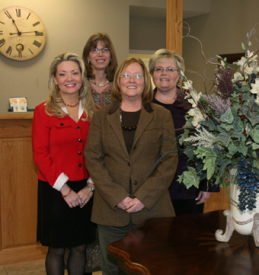 In 1998, Chapin Title Company was purchased by Phil and Ruth Adams. The Adams own and operate six other title companies across the state, all of which command leading market share in their areas. Though much has changed in the last 135 years, the fundamental principles In 1872, M.J. Chapin proudly hung his shingle outside a small, one room office in the Grayson County Courthouse and the company has operated continuously ever since. of honesty, accuracy, and integrity, upon which Chapin Title was founded, remain steadfast.

When asked what makes the company so successful, Glenda replied, “Our people are our greatest asset. Our staff of seasoned professionals offer unparalleled knowledge and expertise and focus on providing great customer service. Chapin Title escrow officers have an average of 10 years of experience in the title industry. No other title company in the area is as strongly positioned to meet the demands of today’s fast paced real estate market.” As a result of its long and unbroken history, Chapin has built the most extensive real estate records in Grayson County and utilize a state-of-the- art computerized database to manage that wealth of information. Using this new technology, Chapin was the first title company capable of indexing and cross-referencing these records in order to more efficiently provide service to its clients.

In addition to having the most detailed real estate records in the county and the most advanced, modern technology available to track those records, Chapin also represents six of the nation’s largest and strongest insurance underwriters. No other title company in the area can say that. When asked what that means to the consumer, Glenda replied. “It means financially, we are strong and sound. The highest-rated title insurance companies in the nation back our policies. As a result, our customers have peace of mind. You can rest assured that Chapin Title has the financial strength to be entrusted with one of the most important investments you will ever make, your home.”