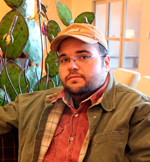 In 2008 when Chance Dunlap’s sculpture was featured in Texoma Living!, he was not long out of Sherman High School. Since then he has pursued his formal artistic training and education at Grayson County College and Southeastern Oklahoma State University, gotten married, and scored a major commission.

Many times artists have periods of intense work offset by creative dry spells. Not Dunlap. He has worked steadily since we last interviewed him. He has created a new body of work meshing his welding skill with dried plant and fiber elements, completed a five-piece commission for the new Texoma Medical Center, and had a sculpture tour with the Seven State Biennial Exhibition hosted by the University of Science and Arts of Oklahoma in Chickasha.

Are you familiar with Chance Dunlap’s work? Share your opinion here.

Over the past two years, his work has grown in both subject and technique. Real changes began to take place last spring when Dunlap decided to go back to the source of his sculpture work—found objects. “I broke loose and created a body of work that was a total departure from what I had been producing,” he said. “I sort of went back to where I started and used mostly found objects. Those works were good for me; I felt that I needed a change.”

The redirected efforts led to further exploration of found objects, but this time more than just metal. Now Dunlap exercises his sometimes off-beat sense of humor with gourds, wood, and other fiber elements married to delicately worked steel and machine parts, to create a different sort of sculpture. What is Dunlap planning for the immediate future?

“I intend to continually push my work where I have not taken it before. Making sculpture for me is what really sets the tone of my life. If I do not feel that I am learning something new or traversing uncharted waters, then I must move on with new methods. I am using processes that are different from what I have used before, and feel I could push up in terms of scale as well. I would really like to create an outdoor public sculpture in the next couple of years.”

Overall, Dunlap is on a quest for what all artists seek—inspiration, new experiences, and technical expertise. “I just keep on letting new experiences help inform my work, and my main value lies in simply hard work, which really can pay off.”

Chance Dunlap’s work can be found locally at Old Katy Glassworks (Denison) and periodically at Centre Gallery on SOSU’s campus (Durant). Also, the artist has launched a new website at www. chancedunlap.com.

There’s something ’bout the prairie as it stretches to the sky
With the tall grass swaying easy in the wind
With the clouds a-headed somewhere out beyond the great divide
On their way to distant places you’ve not been.