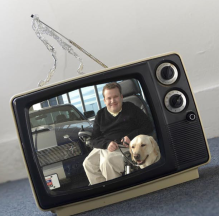 After 20 years of doing commercials with his father, Blake Utter is finally the star of his own show.

At the age of four, Utter began appearing with his father Bob Utter, in television commercials for the family automobile dealership in Sherman. “In October of this year will be twenty years of doing TV commercials,” Utter said. “People have literally seen me grow up on TV.” While no stranger to lights, cameras, “Action!,” Utter, 24, is even more familiar with the action on the sales floor. He comes from a long line of car dealers with several stores bearing the family name: Bob Utter Ford in Sherman, Bill Utter Ford in Denton and Bob Tomes Ford in McKinney.

Although Utter’s father, grandfather and uncles are all car dealers, there was a time when he toyed with the idea of breaking into a different field. Sports is what has always revved his engine, so Utter considered a career in broadcasting. But he couldn’t deny the 10W-30 coursing through his veins and on graduating from Austin College in 2007, he took over as General Manager for the newly acquired Texoma Ford in Denison. The dealership was quickly renamed Blake Utter Ford.

“We got a great reception from the employees when we acquired the store. It was nice to have the support of the employees behind us,” Utter said.

Utter still appears in the TV spots, only now they are co-branded Bob Utter Ford and Blake Utter Ford. But after the klieg lights come down and the cameras stop rolling that when he really gets the show on the road.