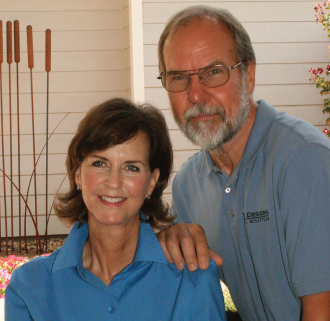 In another life, Reba Browning was an educator, working with children as a teacher and principal. Her husband, Glenn Spelis, was a U.S. Customs agent, a pilot who flew across North America and South America pursuing drug smugglers by air. Today, they have a new life, working together to create sculptures that enhance their environment. The price tag on a metal sculpture in downtown Denison was the catalyst that brought them to it.

The two became acquainted through a mutual love of Corvettes, and after their wedding in 1999, Browning and Spelis moved to Lake Texoma from San Angelo. Browning had painted watercolors for years, but Spelis was just not the artist type. One day in 2000, a large metal sculpture with an impressive price tag caught his eye in a downtown Denison shop. Spelis decided he could learn to weld and that he would make a sculpture for his wife. So he did. Spelis flew through the welding program at Grayson County College, developing senses of composition, proportion, and other elements of art. The couple formed RGDesigns that same year.

Inspired by nature, the setting and the metal itself, Browning begins the creative process with a design. After they work out the details together, Spelis uses his welding and metal skills to form the sculpture. Browning then finishes the piece with details such as glass slivers or chunks, which catch the light and play off the heavy metal. They like rummaging around scrap metal yards or recycling bins, searching for a discarded treasure that will add personality and bring their piece to life.

The finished pieces lean toward the modern, but deep meaning is not an RGDesign goal.. “I don’t make things to make a statement,” Browning said. “We want it to be pretty and to make the area attractive. It’s not bizarre, not avant-garde. If it makes me feel good, I make it.”

The couple recently moved into a new home outside Pottsboro that combines environmentally friendly elements with their love of art. Colorful pieces of pottery, as well as art glass, collages, paintings, and a model of the airplane Spelis flew in his other life are on display throughout the home. Outside, look for Invictus, an eight-foot tall RGDesign, as a welcome.

Browning still works with watercolor and takes classes at Grayson County College, but the joint artistic venture with her husband is her primary focus. Their work is represented at the Mary Karam Gallery in Denison They are members of the Texas Sculpture Association and exhibit in membership shows in the Dallas area. They also donate pieces to local charitable events.

Just a reminder, with cold weather around the corner, stray and unwanted dogs and cats will be looking for shelter and food. Why not give one a home? In return, you get unconditional love and the possibility of a lifelong friend. Both of my dogs are rescues and each has become a loving companion that brings joy to my life— sans their run ins with skunks this summer.