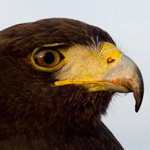 Falconry, one of the oldest hunting sports, is the taking of wild quarry in its natural state with a trained raptor, also known as a bird of prey. No one knows exactly when man called the first hawk from the sky to be a hunting partner, but it is likely that falconry began between four thousand and six thousand years ago in central Asia.

Early European history is full of examples of the importance of falconry as a sport and more. Falcons were used to ransom kings and noblemen from captivity during the Crusades. Battles were halted for falconry hunts. Armies gave food under truce to their besieged enemies to feed their falcons, making sure that only the birds were fed.

Although its popularity waned as firearms replaced it as the hunting sport among the upper class, falconry is still alive and thriving today. It is practiced in almost every part of the world, including Texas and here in Grayson County, where Steve Armstrong of Denison has been practicing falconry for more than seven years. Armstrong takes his well-seasoned Harris’ hawks out after quarry ranging from small rodents to the occasional rabbit.

Have an opinion about this sport? Is it a sport? Is it the same as deer hunting, or any other type of wild animal hunting? Tell us what you think and Leave a Comment.

Unlike in the past, when participation was regulated by social status, today in the U.S., falconry is a highly-regulated sport, requiring not only a hunting license, but also state and federal falconry permits. Would-be falconers must pass a comprehensive test, build hawk-keeping facilities to exact standards, and collect a large array of equipment to properly care for their birds. They are trained during an apprenticeship of a minimum of two years, learning to care for their birds as well as to respect their prey, the land, and the law.

Falconry has also changed with the times. While it is still primarily a hunting sport, you will also find falconers assisting in breeding and reintroducing endangered species into the wild, as witnessed with the recent successful program with the peregrine falcon. Falconers work with licensed raptor rehabilitators, give conservation education programs, and practice their art at airports and public facilities to naturally control other birds that present safety and health hazards.

Armstrong is a founding member of the Blackland Prairie Raptor Center in Collin County, a group that currently presents education programs throughout the area, including to many Denison schools and local organizations, such as the Hagerman Wildlife Refuge. He also covers the area to pick up injured, sick, and orphaned birds of prey to take to a raptor rehabilitator in Dallas.

But his passion is that of those who have come before him for thousands of years, intently watching the silhouette of a hawk against a cold, winter sky, waiting for the next chase, and keeping alive the ages-old partnership between raptor and man.