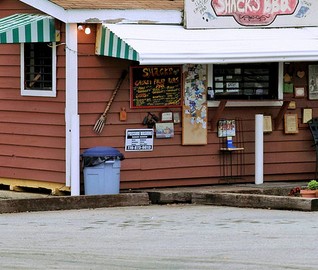 Learned men may differ on the reasons, but one school of opinion holds that the best barbecue comes from joints.

Joints have warped, barn plank walls that haven’t been painted since Herbert Hoover was in the White House, or they’re made out of cinder blocks that have turned a greasy mahogany from the pit smoke. The operators hose down the place when the health department complains or come spring, whichever comes first, and the only restroom has a little screen door latch to advance the idea of privacy.   The walls and the counter are covered with brown tinged signs that were really funny in 1926. “In God We Trust—All Others Pay Cash” or “We’ve got a deal with the bank —they don’t sell barbecue—we don’t give credit.”

They sell barbecue, traditional side dishes, pink Peanut Rounders, Chick-o-Stix candy bars (and no, they are not made of chicken; they are peanut butter logs), hard boiled eggs pickled in red juice and that’s about all. In the classier joints there’s a big jar of pig trotters on the counter.  Beer, if it’s in a wet county, or sweet tea and soda pop—Coca Cola, Dr Pepper or RC—are the beverages of choice if the county is dry. (Pepsi is a Yankee drink.)

Of course if you know somebody in the back named Leon, the wet or dry part might be irrelevant. Whatever you do, don’t ask the fellow behind the counter, the one who looks like he splits the wood for the pit with his fist, for Perrier with a twist of lime. You know you’ve found a top-line joint from the haze that hangs over the parking lot like a smoky corona, and when you get out of the car, the smell of hickory or mesquite reaches out and tickles your nose about twenty feet from the door. If you run across a place like this, and the barbecue lives up to the promise of the surroundings, you might consider buying a tent and setting up housekeeping in the parking lot. If it doesn’t, well, as they say, getting there is half the fun.

I heard from an old friend recently. Herb Feemster is better known as Herb Fame, half of the Grammy Award winning singing duo, Peaches & Herb. The duo’s iconic love song, “Reunited,” reached the number one spot in April 1979 and remains one of radio’s Top 25 Most Played Love Songs of the past three decades.