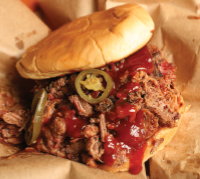 It’s About the Meat

Years ago I attended the great annual Labor Day dove shoot in Cartersville, Georgia. A company that made automobile transporters sponsored the event each year, and it attracted everybody who was anybody in the business and political environs of Georgia. I was in neither of those elite categories, but I knew a secretary who worked for the company, and she wrangled me a prized ticket. I was not there to blast birdies but for the big barbecue—actually in Dixie it’s “barbeque”—that took place in the afternoon.

I drove up from Atlanta with a friend who was a hunter, and we arrived before the sun had cracked the early morning sky, so we could join the crowd for sausage and biscuits and gravy on the lawn of the restored antebellum plantation house on the property. When the nimrods trudged off to the fields to assault the doves, I found a spot under a big tree and settled in with a book.

About 2 p.m. the hunters took a break and came in for the barbeque. After pulled pork, Brunswick stew, cole slaw, and the other standards required of the Southern barbeque tradition, it was back to the hunt and back to the book. As the afternoon wound on, I grew bored and was ready to head home, but until my ride came in, there I was. I wandered over to the company hardware store, a business they had started so they could get preferential prices on tools for their manufacturing plant, to see what was going on there.

On a concrete slab at the back of the building, one of the employees was tending an old barrel smoker. “Want a pork chop?” he asked, and when I nodded my assent, he opened the top, speared a one-inch thick slab of meat rendered GB&D (that’s golden, brown & delicious) by hours over the coals, stuck it between two slices of ordinary light bread and handed it to me. The pork was warm, and juicy, and smoky, and possibly the best tasting thing I had ever taken a bite of. Ever since that day behind the hardware store, I’ve wondered why? What made that pork chop so unforgettably delectable?

It is basic. It is meat. Sometimes that is just what it takes to satisfy the primordial instinct that lingers on in our DNA as a gift from our prehistoric ancestors. At least that’s my theory, and I’m sticking to it. That’s why barbecue is so compelling and so satisfying if done right, and right means simple more often than not. Sauce is nice, complex rubs are nice, but in the end, it’s about meat, well, meat and smoke perhaps, and it’s been that way since Alley Oop and his buddies tossed a haunch of some now fossilized critter on the fire and sat down to eat.

In Texoma recently, a baker’s dozen of serious barbecue students spent a Saturday afternoon looking for something good to eat. What follows are the notes from the road, a consolidation of their opinions, as they went looking for barbecue, looking for meat, and finding Texoma’s Favorite BBQ Joints, Shacks & Stands.

How We Selected This Year’s Favorites

Last year for the inaugural Texoma Living! Barbecue Issue, we visited seven locations that met our self-imposed criteria for being either a joint, a shack or a stand. We had nothing against some of Texoma’s new and old favorites such as Cackle & Oink, the Hickory House, Jones Family Barbecue, or The Rib. We just wanted to take things back to basics.

All seven offered something to commend them to barbecue aficionados, and so all seven, OO’s Smokehouse in Sherman, Perk’s in Savoy, Smoky D’s in Knollwood, the Old Mining Camp in Denison, Randy’s in Denison, Smoky G’s in Van Alstyne, and William’s Old Style in Colbert, Oklahoma, garnered a write up and in most cases a crowd of new fans.

This year we decided to revisit all of last year’s places and add five new spots, Fat Patti’s (now closed) and Fine BBQ in Sherman, Pork on the Bone in Sadler, Edd’s Smoked Meats and Wild Bill’s in Denison, and Two Brother’s BBQ in Pottsboro.

The task was daunting, the challenges, well, challenging, so much barbecue, so little time. It was tough work, but then somebody has to do it. There were thirteen somebodies in this case— we had intended to have twelve, but somebody brought a friend—so we divided them into four teams and assigned each team three joints, shacks, or stands. The judges tried sampler plates of everything the barbecue purveyors offered and collectively reached a score for each place. When everyone returned to Barbecue Central in Sherman, we compared notes, named names, and argued the merits or each team’s favorite places.

Like last year, each place had something to commend it, but in the spirit of American Idol, we decided to winnow the field down to the judges’ top picks. Call it the best of the best, at least for now. By the time we got it down to the final four, most of the judges needed a break and an Alka- Seltzer®, we called it done.

Noel Barrick, AIA, a 1966 graduate of Sherman High School, was the principal-in charge and the project manager for the new Texoma Medical Center in Denison.