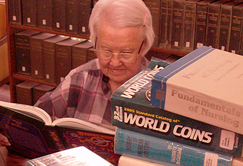 In her fifty-plus years behind the reference desk at the Denison Public Library, Dixie Foster has been asked some strange questions.

“All in all it’s an interesting job and I learn something new every day. Working in a library is fascinating.”

There was the curious ten-year-old who wanted to know, “How do snakes take baths?” and another patron who had to know about tides in South America. “It’s amazing the types of questions that people come up with—it really is,” she said. Usually the questions are more familiar. What was the real name of the Yellow Rose of Texas? “Her name was Emily West Morgan,” she said without hesitation, and chronicled a short history of the Texas legend.

Too easy? How about the name of the last cow to graze on the White House lawn—well, Pauline Wayne was her name, and she belonged to President Taft. Or if you are pulling your hair trying to find out the average weight of an African elephant—it’s thirteen thousand pounds.

Are you perplexed by the name of the first American monkey in space? Well that’s easy, his name was Albert II; he was a rhesus monkey, and he was launched into the cold, dark abyss of space on June 14, 1949.

Ever wonder what a group of crows is called? Well, its murder finding that gem. Or maybe, what the name of a group of geese is? You would probably have to Google to find that gaggle. What about a gang of mosquitoes? The immediate thoughts: a pest, a nuisance, or even a swarm or plague (locusts are a plague) come to mind, but they are all wrong. As Belinda Sakowski, the reference librarian in the children’s literature department at the Sherman Public Library, found out for one patron after a long quest through almanacs and Internet sources, a group of mosquitoes is called a scourge.

Patrons ask librarians brain pickers like these every day. Sakowski is convinced that she could write a book about the myriad of offbeat questions asked by patrons. Like other librarians, she believes strongly in the adage that “there is no such thing as a dumb question.” In the pursuit of knowledge all questions are fair game. “When you want to know, you want to know,” she said. “We try our best to find some kind of answer or something that will at least somewhat satisfy their requests, though it can be a challenge.” Yet, with a smile and a shrug, Sakowski admitted, “A lot of the questions we get, we think are obvious.”

Why? “I’ve decided that people come to the library but nobody reads—you know like signs. We’ll have a sign on the door that says pull, but patrons will push on the door anyway. The one that really gets me is when people call and ask if we are open. No—no, I’m just here answering the phone because I want to,” she said, rolling her eyes. “We mostly get questions that if you were to stop and think for a second you would rephrase. For example, ‘What are your hours today?’”

Visitors frequently ask Sakowski for photographs, of subjects ranging from Moses to a T-Rex. Of course there are no photos of anything before the middle of the 19th Century when the camera was invented, but Sakowski said that she can find you a real nice drawing of almost any dinosaur—Moses too, although she can’t vouch for its authenticity.
“A lot of people ask for pictures of fantasy creatures, like dragons or fairies, not because they want to read about them—no—it’s because they want to have tattoos done,” Sakowski said. “They are always really specific about what kind they want, too—the dragon’s wings need to be pinned back, or it needs to be curving its back in a certain direction.”

From pictures of T-Rex and dragons to questions about hitchhiking hummingbirds, Sakowski has fielded some strange ones. “This little lady, a real sweet lady, came in swearing up and down that she had heard that hummingbirds hitch rides on the back of whooping cranes when they fly south for the winter. I kind of sat there and thought, huh? We went through every text about birds that we have and could not substantiate that for her, but she left thoroughly convinced that it was a true story.”

Steve McGowen, a librarian at the Denison Public   Library, smiled and shook his head, remembering the numerous calls he has received regarding tavern trivia. “People will call up in the afternoon from bars, wanting us to settle their bets. Like what was Gene Autrey’s or Robert E. Lee’s horse’s name?” In case you are still scratching your head over that one, Gene Autrey’s horse was Champion, and Robert E. Lee’s was Traveler.

Alvin Bailey, a fellow librarian, added, “I guess we’re the ultimate source of make-sure-you-got-it-rightdom. A lot of the time people come into the library looking for verification of something they feel they already know, and when it’s wrong, it’s hard for them to accept that. It’s just one of those situations where you ask the question and you’re not prepared for the answer that’s coming to you. Other times we get questions, and we have to just throw our hands up and say we don’t know. Sometimes it’s because it is beyond our research capabilities, and other times it just isn’t there.”

Amateur genealogists are among the most-seen seekers of information, as they hunt for obscure leads on their elusive ancestors. “They always want to give you the grand epic regarding their research and family history when they ask questions…and at the end of the day what they really want to know is if we have any information from the 1850 Grayson County Census. But it always has to start off with, ‘Well my great-great-so-and-so travelled to Texas from wherever.’.”

The strangest brain tickler that Bailey recalled came from one agitated and confounded patron with a money problem. “I remember one guy coming in here not too long ago who had just opened up a Certificate of Deposit account in Dallas, and he came in here lamenting that his bank was gone. ‘What do you mean gone?’ I asked. Well, he had gone down there, and sure enough the building was gone. I mean completely gone, demolished. And he wanted to know where his money and his bank were, so we tracked through the FDIC, and they told us that it was one of those that had been shut down because of insufficient assets. We ended up finding out that all his assets had been turned over to someone else.”

No question is too difficult for a dedicated reference librarian. And while you could probably find the answer with a quick Google search, you would have missed the opportunity to spend a few minutes with Dixie Foster and that would be a shame.

William F. “Buffalo Bill” Cody was born in LeClaire, Iowa, in 1846. During his early life he herded cattle and worked as a driver on a wagon train, went on to fur trapping and gold mining, then joined the Pony Express in 1860. After the Civil War, Cody scouted for the army and gained the nickname “Buffalo Bill” as a hunter.

Battle of the Big Boxers