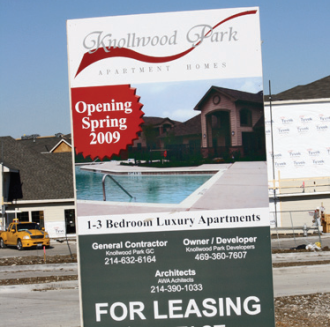 It has been more than 10 years since the last apartment units were built. Now there are two major projects hitting the market. If you travel Travis Street (FM 131 South) you’ve seen Northside on Travis and The Bridges on Travis (previously named Knollwood Park) rise from the dirt. Northside on Travis opened the first of three phases in October of last year. Victoria Ellefritz works for Grapat Group, a management company responsible for leasing and operating apartment complexes. Ellefritz’s project is being developed by a Dallas company with a lot of experience in multi-unit complexes. “The last building of our complex has just been completed and we are expecting to run 95-98% occupied,” said Ellefritz. Up the road, the newly-named The Bridges on Travis Street expects to start leasing in April, according to Wes Hoffman, the project’s marketing director. “We’ll open in two phases with the second phase beginning construction immediately after the first phase has been leased.” As with every apartment or townhome complex the clubhouse, fitness center and pool areas are the major attractions. Both developers put a lot of money into making these “common areas” spectacular and inviting.

How does the current economy affect these apartment complex projects?

It takes years to plan and build an apartment complex, so no doubt the downward move of the economy will have an impact on these projects. Wes Hoffman says the owners of The Bridges on Travis have taken into account the down cycle. “We’re very aware of the financial situation…our pricing models will factor in the economy. Early on we switched to a two phase development,” said Hoffman. “However, our market data suggests there is still sufficient need for new apartments in the Sherman/Denison area and lease up should not be a problem.” Ellefritz at Northside on Travis agrees. “We are not experiencing any slowing in our leasing. Typically for apartment renting the slow time is between October and March,” said Ellefritz. “We’re looking at our projections and we don’t see any major issues to overcome.”

Who is looking to rent?

You might expect that current apartment dwellers are looking at Northside on Travis and The Bridges on Travis as a chance to move on up. In fact, the majority of renters who have signed leases at Northside are people relocating to the area for a new job, either permanent or temporary. Ellefritz explains, “There are nearly 300 new employees coming into Texas Instuments from Arizona, and the Hwy 289 construction is now firmly centered in Grayson County and specialized workers are coming in every week and will be here for several months. They need a comfortable place to live.” In fact, one of those transient workers is Ellefritz herself. “I came here last year to market the Northside on Travis property. Apartment project leasing is what I do for a living and I do it all over the nation,” said Ellefritz. “It just may be the best job in the world. My kids are grown, but live nearby in Oklahoma, so I get to visit them often.” Ellefritz says the job isn’t for everyone. “Certain people are attracted to a job that involves maintaining and growing a business, others like myself enjoy the energy of start up and turnaround projects. Before I get bored with my job, I’m off to the next assignment.” Not to mention she gets a free apartment.

Diana Cosby could be a heroine in one of her best-selling romance novels. She looks the part, long hair the color of single malt Scotch, bright eyes and an easy smile.

You can’t hail a cab with hand waving and a sharp whistle the way you can in the Big Apple, but finding a hack in Sherman and Denison is a lot easier than it was a few years ago. With the introduction of Cowboy Cab two years ago this June and Yellow Cab about eight months ago, consumers have transportation options.