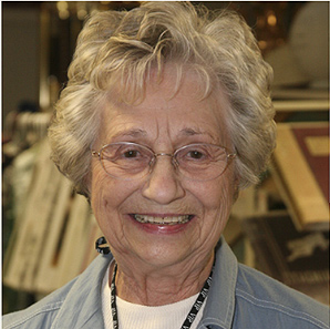 This article appeared in the Spring 2007 issue of Texoma Living! and was updated on June 1, 2011.

“We have the annuals from the first one in 1913 to the present time, but there is no 1918 edition, and we don’t think there ever was. It may have been because of World War I,” Roberts said.

The collection of annuals is important to the volunteers who spend an afternoon each week at the new Sherman ISD administration building on Loy Lake Road. It’s appropriate that this collection of things that track the history of SHS was for many years in the building long known as Central High. It opened to students in 1917, and was the home to Sherman High until 1954.

“We called the group the Ex-Students Association instead of alumni because we wanted to include all students who ever attended Sherman or Fred Douglas High Schools,” said Roberts. That means there are more than 40,000 names on the carefully maintained and researched class rolls.

The idea for the museum grew out of the preparations for a SHS reunion in 1993. From old trunks in dusty attics, from storerooms and barns, came a flood of long forgotten treasures of high school days—class rings, prom pictures, cheerleader outfits, football and band uniforms, letter jackets, trophies, old report cards, and so much more.

Every museum needs a VIP (very important piece) item to display. For the SHS museum it’s the Trophy Table. It’s a table built by students in their shop class in 1927. It has a top with a veneer inlay spelling out “Bearcats.” There are four finials on the table’s legs turned to represent different sports, and in the center is a special display stand.

“They had a football signed by Knute Rockne, but something happened to it, so they made a wooden football to take its place,” said Roberts.

Among the most valuable of the museum’s collections—valuable at least for its historic contents—are the Knox scrapbooks. “We had a teacher back in the 40s named Miss Alma Jo Knox, and she kept scrapbooks on all of her students from the time she started teaching here. When she passed away they were donated to each class president, and we have since acquired them,” said Roberts.

The Sherman Ex-student’s Museum is open on Wednesday afternoons from 1 until 3:30. You can find out more about the Ex-Student Association at http://www.shermanisd.net/Exstudents/sherman_ex.htm.

You are irritable. Your blood pressure looks like a pro-bowler’s high score, and everyone is jumping up and down on your last nerve. Life gets tedious, don’t it? Sherman-based therapist, author, and life coach Brent O’Bannon can provide wisdom to keep you from snapping like a pop star taking that third trip to rehab.