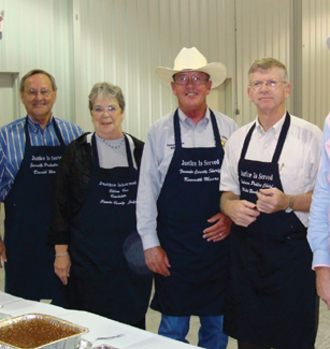 Proceeds from the evening benefited the Fannin County Children’s Center, a nonprofit agency dedicated to serving abused and neglected children. The center’s programs include CASA and the Children’s Advocacy Center. CASA recruits and trains volunteers to be advocates for children in foster care. The Children’s Advocacy Center works closely with law enforcement, child protective services, prosecutors, medical professionals and counselors to provide a coordinated response to child sexual abuse cases in a manner that is sensitive to the victims.

Fannin County Sheriff Kenneth Moore served as auctioneer for the evening and was assisted by Warden Kenneth Karl and Justice of the Peace Joe C. Dale. Silent auction items lined the room to help raise additional funds to sustain the advocacy, forensic interviews, counseling and other support services for children, youth and families who are recovering from abuse and neglect.

“We really appreciate everyone who attended the event despite the weather,” said Children’s Center Board President Melanie Grammar. “We raised about $23,000 to keep providing critical services to children and youth.”

Major sponsors for the event were American Bank of Texas, Ray and Gloria Campbell, Henry and Elizabeth Donaghey Foundation, Glaser Family Charitable Foundation, Kevin and Paula O’Neil and R&K Wholesale. More than one hundred other businesses and individuals also contributed to the success of the event.

Justice of the Peach?

It was meant to be a simple gesture of New Year greetings to his constituents. But someone forgot to proof the ad (hum..sounds familiar). The substitution of an “h” for an “e” made for a humorous moment of Dogberryism.