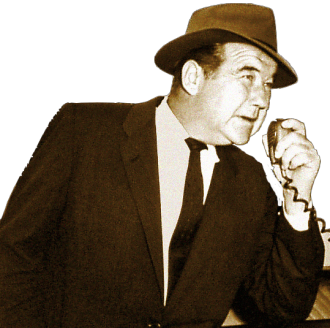 Broderick Crawford (1911-1984) was an accomplished actor in movies like All the King’s Men. But it was his 1955-1959 television series “Highway Patrol” that most boomers remember best. As Highway Patrol Chief Dan Mathews, Crawford commanded 30 million viewers a week. Back in the day, we boys loved all the flashing lights, sirens, gun play and such. What kid has not at least once wanted to be a policeman? Even as older adults, we still have a fascination with cool cop cars—like those new Dodge Charger patrol cars on the streets. Ford Motor Division’s Crown Victoria for the past decade has dominated the market for rear-wheel-drive (RWD) V-8 police sedans. Enter Daimler-Chrysler’s reborn Charger. Dodge is also pushing a Magnum station wagon for patrol duty, but it hasn’t really caught on.  Of course, when you’re sitting on the side of the road hunting for your proof of insurance, you don’t really care how cool the patrol car behind you is. There’s more to why the Charger is becoming popular with law enforcement—speed. The available installed 340-hp 5.7-liter Hemi engine will easily reach 140 mph before its electronic nanny steps in to stop the fun. But even with the limiter, it’s the fastest fullsize, rear-drive police car since the fabled 440 MOPARs of the late 1960s. Our anonymous source at a local police department said most officers would readily give up their well-worn vehicles for one of the awesome new Chargers, if for no other reason than to be lookin’ good behind the wheel. The extra speed is icing.

King of the Crown Vics

About once a month, the southwest lot at Denison’s Texoma Ford is packed row after row with shiny new black and white Crown Victorias—they are patrol cars in the making, waiting for what the industry calls “upfitting.” Little known fact: Texoma Ford is one of the largest suppliers of police vehicles in the nation. Donnie Norman is the dealership’s sales manager and and owner of CopStuff, one of the busiest emergency vehicle upfitters in the industry. (See the related story on this page.) Upfitting has become big business in the police fleet world, according to the trade publication Police Fleet Manager. In a recent issue the magazine reported the Denison car dealer sells about 1,500 patrol cars each year, making it one of the top 3 in the country. How does a North Texas dealer in a small town get this kind of business? Norman networks and invests in appearances at the key trade shows like Police Fleet Expo, taking place this August in Louisville, KY.

If when passing through the city of Howe on Hwy 75, you stop watching your radar detector long enough, you might have noticed off to the right on the service road a small white building with a sign that reads, “COP STUFF.”

The building remains, but by the time you read this, CopStuff will have moved to a new, larger facility just down the road in Van Alstyne.

“Our main customers are state and local governments,” says Hewitt, “but we also sell and install the amber lighting you see on city service equipment.” The most common police vehicle is the venerable Ford Crown Victoria, but the sleek new Dodge Charger is coming up close behind. Most U.S. auto manufacturers have a police fleet operation. Chevrolet sells Tahoes and Impalas. CopStuff is currently upfitting 150 Impalas for the Dallas PD.

Hewitt says they have also upfitted a Mercedes undercover sedan for the U.S. Marshalls.

In 1978, the Cottons moved to Chickasha, Oklahoma, Ronald’s home town. Joetta worked as a secretary in an oil field company. When the oil business went bust, she landed a job in the Chickasha Library as an administrative assistant and loved it. She took library science classes and completed a bachelor’s degree in Business Administration and soon became the Library Director.

Color is the hottest trend in landscaping all over the South. But to most homeowners in our area, color means one thing—water-thirsty plants—and we all know what a fragile resource water is.

Is there a way to have it all in Texomaland? Can you punch up your landscape with high impact color, and still enjoy the satisfaction of knowing you’re a wise water steward?