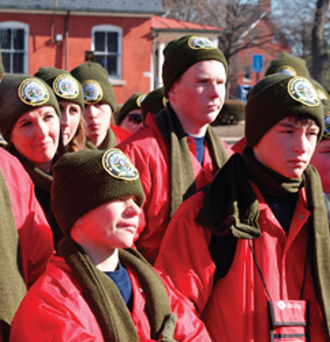 The Perrin Field Honor Guard Corp is a Boy Scout group that was established in 2006 by Shannon Thomas. The unit provides patriotic and ceremonial services, to communities and Service Veterans of the United States.

Since August, 2006 the unit has participated in 50+ events, never charging fees to cover expenses incurred while planning and preparing for an event. Their mission is to represent the Boy Scouts of America by providing Honor Guard style flag presentation’s at civic functions, parades and military ceremonies. They have strove to maintain precision, professionalism and pride, while demonstrating the highest level of commitment to our country and community.

On January 16th, 2009 a team of 24 Boy Scouts and 10 Scout Leaders traveled to Washington D.C. representing the Texoma Valley District, and Circle Ten Council of North Texas, during the week of the Presidential Inauguration festivities. The boys began raising funds to cover the trip expenses last summer. The trip and Honor Guard team is sponsored by Boy Scout Troop 911, Charted to the Woodmen of the World Lodge 11, Denison. The team is supported by 10 different local scout units and 5 school districts.

It looks like a castle keep with its crenellated top, just the place from which to pour boiling oil down on the heads of any knaves and varlets trying to capture Loy Park. But there has not been an attack of knaves and varlets in quite a while, so what is up with Grayson County’s medieval monument? The stone tower in the park stands on a small hill just off the road to the fairgrounds. It is separated from the lake by a cluster of oak and pecan trees.

Just off the square in Bonham, a little miracle is unfolding. ACT Communications, a local success story in the 1980s and 90s, is on the rise again.